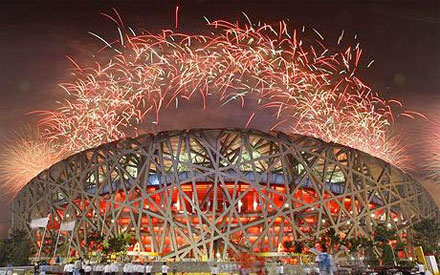 I woke up Sunday morning to a promising Pacific Northwest day as the closing of the Olympic Games was just taking place in Beijing.  Sixteen hours behind, or – setting  Greenwich aside – perhaps eight hours ahead, my curiosity was focused on one thing: the results from the US-Spain basketball game which had taken place a couple or three hours before.  And accustomed as I am to get news live, and most preferably unfiltered, I marched right to the digital pages of Marca, Spain’s most read sports daily.

“Medalla de plata, orgullo de oro” (medal of silver, pride of gold) was the catchy headline… which told this reader that it must have been a close game, one in which America’s so-called “Redeem Team” had gone from a prior “embarrassing” bronze medal in the 2004 Athens’ Games, to a “deserving” gold in Beijing.  Apparently, the Spanish players had given their American counterparts an unexpectedly tough game which resulted in a happy aftermath for both sides… the Yanks taking Gold and the Spaniards content by keeping their Pride golden – with Silver – after a great game.  There was, of course, that expected jingoistic cry by some (or many) Spaniards that much of the refereeing favored the Americans, which I must confess, after viewing the game hours later, showed some officiating calls ranging from controversial to rebukable.

But be that as it may, jingoism is alive and well, not just in the United States of America but everywhere else.  For two weeks, much of what I’ve read in the press concerning the Olympic Games, both foreign and domestic, tends to exalt the locals while denying or diminishing any merit obtained by the competing “others”.  Instance after instance of this jingo-malady appeared before me as I circumnavigated the globe of periodicals, from China to Australia to Argentina to Brazil to the United States and much of Europe, as well as Russia. Jingoistic national pride did prevail for the most part, often bordering on great immaturity and lack of judgment.

Four years ago, as a sociopolitical post-mortem of the Athens’ Games, my column did denounce the pseudo-pride exhibited during the competition, based more on ignorant jingoism than in any accrued merit by the athletic contingents of the larger nations vying for political prestige.  Obviously, if the medal count had been measured against some standard of combined GDP and population, major nations, such as the United States, would not fare so well, and the greatest accomplishments would have been achieved by Caribbean nations (Bahamas, Barbados, Cuba, Jamaica and Trinidad & Tobago).

This Olympiad was not that much different, and the medal race approach was simply the passing of the supremacy baton from the United States to China, even if the United States resorted to “its own way” of counting success by giving equal weight to gold, silver and bronze medals, instead of granting the appropriate relevance to the gold as it is done in most of the world.

As for the forty billion dollars spent by China preparing for the Olympics, much of it in building superior installations, such sum may seem as politically pretentious and overbearing for a nation still emerging out of a developing world and a population four times that of the United States.  But that’s precisely the message that China intended to send to everyone outside their borders in a courteous but profound way.  They chose sports to tell the Western powers that Western preponderance over much of the world, including Asia and Africa, lasting almost five centuries, is fast coming to a close.  Yes, China’s time has come; it’s already here.  And so it’s Russia’s; and within a generation, India’s and a half dozen other nations waiting in the wings.

Unlike the economic albatrosses that prior Games have brought to cities such as Athens, Sydney and several others before, this money was well earmarked… and certainly affordable, and available, to a resurgent China.

This morning, I read a brief commentary penned by Fidel Castro in Cuba Socialista on the subject of the Beijing Olympics, where he basically asked everyone to put the Olympics in proper context when probably 80 percent of the people in the world lack the facilities to practice, and the opportunity to compete.  And when you add up the populations of much of what should be called the “submerged world,” for they certainly don’t seem to be emerging, that percentage seems to be right on target.

Are we implying that the Olympic Games are nothing but a fancy parade for a fifth of the world’s population?  Hardly!  Perhaps several thousand world class athletes, and their corporate sponsors, benefit from this display of skills, but hardly anyone else does.  In the wealthy nations of the world, sports are for the most part just entertainment where the populations are not performers, only spectators… and obese at that!

Congratulations, China… you are up one!  Of course, it’s just in sports.  But will they try to do the same in the arts, education, and the human condition?  More power to them if they try and succeed; and as they do, perhaps the relevancy of human rights as they strive to better the human condition will vest that nation as an acceptable role model.