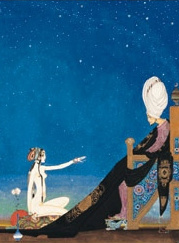 Meninists are men who recognize and support the principles of women’s political, social, and economic equality. Meninist men do not need women, as once Virginia Woolf pointed out, to reflect themselves back to themselves twice as large as they really are.

Exit man who, to paraphrase Phyllis Chesler, says, : “Listen, children, here are the facts: Your real Mother is me–your Father!”

Enter Scheherazade (Shahrzad) who, to paraphrase Phyllis Chesler, once again,  says: “Listen, children, here are the facts: Never will man find a woman as able as willing, to give birth to him again.”

Scheherazade was not a fictional character but a legendary Persian queen and the storyteller of The Book of One Thousand and One Nights.

“I became obsessed with Scheherazade,” Azar Nafisi (the author of bestselling book Reading Lolita in Tehran) said of the legendary heroine, who used her courage, wise and witty to face down her own likely death and, in the process, transformed a kingdom and a king.

The story goes that every day Shahryar, Persian king, who had been betrayed by his first wife and turned violently against all women, marrying a yougn woman every day and having her put to death. By the time the king was introduced to ScheherazadeHe had killed three thousand women. For saving the rest of the kingdom’s young women from slaughter, Scheherazade volunteered to go to the king.

In Sir Richard F. Burton’s words, “She had perused the works of the poets and knew them by heart; she had studied philosophy and the sciences, arts and accomplish meets; and she was pleasant and polite, wise and witty, well read and well bred.” With this immense knowledge and impressive narrative skills, she established a pattern of spinning out an exciting tale that took one thousand and one adventurous nights, and three sons later.  With her stories, Scheherazade succeeded not only entertain the King but also reeducate him in morality and kindness, transforming a kingdom.

Scheherazade has therefore become a powerful symbol of resistance for millions women from North Africa to Southeast Asia who have had to react to Islamic fundamentalism in recent decades that seeks to set back decades of modernizing trends in a number of Muslim countries.

“A Muslim woman today is much like her: Words are the only arms she has to fight the violence targeted against her. Before a Muslim woman consents to die, she must fight. Scheherazade said so,” wrote Fatema Mernissi in her book Scheherazade Goes West.

Time and again we are told, like in the words of Ryrard Kipling, “East is East, and West is West, and never the twain shall meet.” For all we know, Scheherazade recognized  no West and no East when it came to women’s needs and rights.

If you at all suspect that you might be gender-blind, do not avoid this Scheherazadean question–answer it: Do Muslim women believe and desire what Western women believe and desire?  Following Virginia Woolf’s model of sexual equality, the internationalist feminists are convinced of the universality of women’s needs and rights beyond national boundaries. As Woolf once said, “As a woman, I have no country. As a woman, I want no country. As a woman, my country is the world.”

Consider: if it were natural for women to cover their bodies, they would not need so many laws and sticks commanding them to do so. Women would not have to be tempted into it by carrots of immortality, men’s love, or God’s love. Like so many men, to paraphrase Phyllis Chesler, “women follow orders– to their own detriment, to their very deaths–when they are given by male dictators, by father-figures on earth and in Heaven.”

But, according to professor Shahrzad Mojab, some postmodern feminists defend the use of veil in the guise of respect for other cultures and denouncing critics of the veil as cultural imperialist. For example, professor Fadwa El Guindi goes as far as claiming that for women, veiling in contemporary Arab culture fulfills many functions. It can signify privacy, kinship, status, power, autonomy, and political resistance, she says. Boiled down to its essence, this view is a cultural relativism, which render nations or individuals with authority to (mis) use culture as a basis for justifying human rights abuses.

Professor Mojab is right when she says that “Stoning a woman to death in Bangladesh should and can be seen as an assault against women everywhere, and it should and can spur us to think and act in North America.” Disciplining the woman’s body through Islamic dress codes also should be regarded as a humiliation of women everywhere by Islamic theocracies. She correctly insists that it is necessary and appropriate to denounce and criticize the veil even if all Muslim voluntarily wear it.