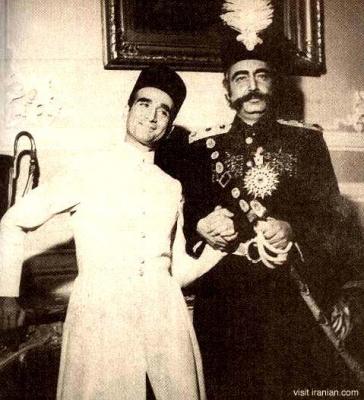 Parviz Fannizadeh and Jamshid Mashayekhi in “Soltan-e Sahebgharan” (1356=1978) directed by Ali Hatami. This was a critically acclaimed Bio Epic about the “Martyred” Qajar King Nasseredin Shah. The relationship between the King and his “favorite” adopted son or page Malijak was quite ambiguous and flirted with a form of suppressed homosexuality. The historical context, costumes and settings were faithfully recreated and the film crew was allowed to shoot the film at the Golestan Palace. Nasser al-Din was assassinated by Mirza Reza Kermani. Interestingly the film was not censored during the Pahlavi era despite some of the themes that could have been easily tranposed to Mohamed Reza Shah’s reign such as the Qajar monarch’s absolutism and justification of divine Kingship, the power of the State Police or the arbitrary trial of Mirza Reza Kermani presented more like a victim rather than a religious zealot. It should be noted that the leading cast formed by Parviz Fannizadeh as Malijak and Jamshid Mashayekhi as Nasseredin Shah were critically acclaimed for their performances and awarded at various Iranian film festivals. It should be noted that the late Parviz Fannizadeh was to thrill audiences again in the popular TV series Daie Jan Napoleon in the role of funny gardner Mash Gassem.