Perils of the Persian Gulf 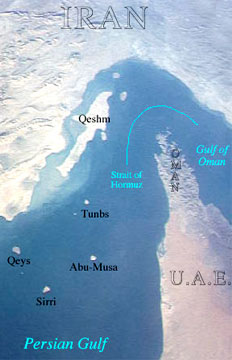 As an academic of at least 40 years of research experience in geographical, historical, political and legal affairs of the Persian Gulf, I do not find it easy to see continued conspiracies against Iran, her territorial rights and integrity and the consequential threats to peace and security of that region without trying to voice out the concern of the people of Iran as well as that of other peace-loving people of the region. These concerns are provoked by racially inclined activities against Iran’s historical identity, her national dignity, and her territorial integrity along the line of former Baath party’s anti-Persian legacy the cause of which the Al-Nahyan of UAE and their brethren in Qatar seem to be bent to champion in the region to the detriment of regional peace and stability.

Like Saddam Hussein they consider the Iranian province of Khuzestan as an Arab land and continue sponsoring the Al-Ahvaz terrorist group created by the former there; like Saddam Hussein they speak of many Iranian islands including the islands of Greater Tunb, Lesser Tunb and Abu Musa, as Arab territories ‘occupied’ by Iran; from Saddam Hussein, they have inherited the racially motivated idea of changing historical names of geographical places in and around the Persian Gulf; and like Saddam Hussein they intrigue with other Arabs to turn these mischief’s into some form of cause celebre at the Middle East level against Iran and her legitimate territorial rights in the Persian Gulf. To do that, they even resort to conniving false pretences of friendship with some officials in Iran, enticing them to join their all-Arab meetings where communiqués are issued in which Iran and her rights in the Persian Gulf are disrespected.

It was only a few months ago (17 March 2008) that the Al-Nahyan of Abu Dhabi enticed the Arab League foreign ministers’ meeting to undertake the impertinent action of writing to UN Security Council alleging danger to the security of the Persian Gulf of the lawful return of the three islands of Greater Tunb, Lesser Tunb and Abu Musa to Iran some 37 years ago. My letter of 30th March 2008 which was addressed to Your Excellency contained a series of documented facts that demonstrated the falsehood nature of the story the Arab League had put together in its said letter to UN. Even in that letter Arab League was enticed to use the racially motivated term Arabian Gulf against the officially stated position of the United Nations in respect of the historical name of the Persian Gulf.

Your Excellency, having exposed the impertinent nature of Arab League’s ill advised correspondence with UN Security Council of 17 March 2008, I now would like to inform you that the UAE intrigues have taken a different turn. This time Abu Dhabi has launched (on 29th August 2008) a complaint at UN level alleging ‘stark violation’ by Iran of the 1971 Memorandum of Understanding signed between Iran and the Emirate of Sharjah, without, as usual, trying to document any evidence to prove their unfounded allegations. The launching of these unjustifiable pretences proves once again that Al-Nahyan’s appetite for making excuse of any trivia to manufacture territorial disputes with Iran that would line up Arab world against Iran at the peril of stability of the world of Islam is insatiable.

Perhaps it would be advisable to invite the Al-Nahyan of Abu Dhabi to study Articles 1 & 2 of the Anglo-Iranian-Sharjah Memorandum of Understanding of 1971 to see that it enforces in no uncertain terms that:

Article 1. Iranian troops will arrive on Abu Musa. They will occupy areas the extent of which, have been agreed on the map attached to this memorandum.

Perhaps Abu Dhabi needs to be reminded of the legal implication of the term ‘full sovereignty’ for Iran within the agreed areas controlled by her in Abu Musa Island and the fact that misrepresentation of these clear terms amounts to no less than deliberate efforts to cause conflicts that can overthrow peace and stability in the region.

Perhaps Abu Dhabi is to be reminded of the fact once again that the Emirate of Sharjah is Iran’s partner in the 1971 Memorandum of understanding and H. H. the Emir of Sharjah refused in the extra ordinary meeting of 12 May 1992 of the Supreme Council of the Union to entrust his Emirate’s authority over the issue of Abu Musa Island to the Al-Nahyan leaders of the United Arab Emirates and abandoned that meeting. Hence, UAE leadership’s act of assuming authority for the case of Abu Musa Island in the absence of the ruler of Sharjah and without his consent renders UAE pretences in respect of Abu Musa and related MoU completely illegal.

Perhaps it is worthwhile to point out that in their efforts to disturb peace and stability of the region by making excuse of any trivia concerning Abu Musa Island the UAE leaders have often intrigued with Qatar and extra regional powers like United States of America and Israel who have openly advocated real war against Iran. Abu Dhabi, for instance, committed an armed assault on an Iranian boat in the territorial waters of Abu Musa on June 3rd 2004, and conspired with Qatar for a second armed attack on Iranian nationals in the same vicinity a week later. These assaults were aggressive acts with the intent to trigger a chain reaction that would overthrow regional peace and stability that have been achieved through years of Arab-Iranian hard work to strike durable regional balance of forces. Though the Foreign Ministry of the IRI at the time failed to document these armed adventures for the attention of the United Nations, perhaps for an ill-conceived ‘crisis control’ exercise, Abu Dhabi seems to have concluded misguidedly that its repeated violation of the 1971 MoU and its reprehensive armed mischief against regional peace can be tolerated by the peace-loving people of the region for ever.

Sir, perhaps it is time to remind Abu Dhabi of its duties as a member of the United Nations towards maintenance of peace and security in the region and in the world at large by abandoning its illegitimate claims to Iranian islands of Greater Tunb, Lesser Tunb and Abu Musa and to stop acts of aggression against Iran, her national interests and her territorial integrity.