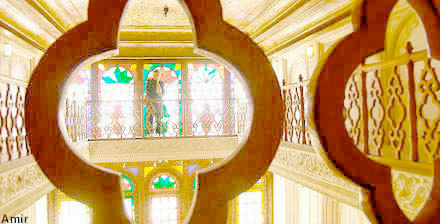 “I am afraid he has been driven to insanity and has completely lost it.”

Ibrahim, staring in the eyes of the chief psychologist for a moment, turned his eyes toward Kemal tied to the bed and with his right hand all bandaged up and, fighting tears, whispered, “it’s a malignant tumor in every poet’s heart.”

“You can go inside and see him if you like but just for a few minutes. We have given him some pills and he shouldn’t be disturbed by any heavy conversation, if you know what I mean,” Dr. Assadi, holding the door knob and waiting for Ibrahim’s acceptance of his stiff condition, knew he was taking a small risk by letting that seriously intellectual-looking man inside and, yet, was hedging his bet that Kemal would be happy to see one of his friends.

“Sure, absolutely, no problem,” Ibrahim responded and then was let in, putting on a fake smile.

“What is happening old friend? How are you feeling?” He asked K. who smiled back feebly and pointed at the small fan at a corner. “What? You want me to turn it on?” Ibrahim asked and then turned the switch on and turned, sat and said, “you’re right, it’s a little hot here. So how are you feeling?”

“Fine,” K. half closing his eyes answered, “did you read it?”

“What? The manuscript. Of course. It’s a great piece of literature god damn it, I’d say your best work so far.”

“Really?” K. reacted with a childish enthusiasm, “or are you saying that?”

“Rubbish. I mean it. Absolutely. It’s very engrossing and hallucinatory, like walking through a confusing maze without knowing where you’d land, and that to me is the beauty of it, the fact that you destroy any sense of linear narrative, even though any careful reader could see the internal coherence. Great great work.”

“Thanks.” K. closed his eyes again, succumbing to drowsiness for a long moment. When he opened his eyes, Ibrahim was gone and a male nurse was waking him to eat his meal consisting of a small kebab, yogurt and a soft drink. A few minutes later, Dr. Assadi entered and was dismayed that K. had not touched his food.

“What is the matter? You’re not hungry?” K. shook his negatively and prepared himself for a futile sermon about the necessity of staying alive. To his surprise Dr. Assadi started eating his food without looking at him, which for an instance caused a minor enrage in him quickly followed by determination that he was being entertained by a dose of reverse psychology. “How pitiful these psychologists are,” K. said to himself, “he probably is Pavlvoian, a pure behaviorist and next thing you know will be preaching about psychological detachment.”

“So tell me Kemal, what have you been thinking about today?” Dr. Assadi asked after he was finished with it, sipping at the 7 Up.

“Nothing? Or is it that you don’t feel like sharing?”

“I see. May be you like to ask me some questions?”

“Okay,” Dr. Assadi, kept staring meaningfully at K.’s wounded hand and after a long pause that made K. uncomfortable, turned his eyes at the book on the table, picked it up and read the title loud, “Responsibility of Intellectuals” and then opened it and glanced through the pages with such patience that made K. wonder if he was play acting or was seriously interested and had no other patient in the whole mental hospital, timarestan, to look after. Finally Dr. Assadi closed it and put down and said, “interesting, who gave it to you? Your friend?”

“Right. Ibrahim. He seems like a nice man. Is very worried about you, you know, told me this morning that you should have mercy on your mother and your sister who are extremely concerned about you. Have they visited you this past couple of days by the way?”

“Yes,” said K., refrained from adding further information that they were here yesterday.

“Did you start it yet?” Dr. Assadi asked pointing at the book and when he saw K.’s negative reaction wondered why.

“I find the title repulsive,” K. answered, “please throw it away.” This surprised Dr. Assadi and yet he instantly obeyed and threw it in the trash can. “There, are you happy now?” K. grined approvingly and, rewarding his doctor, ventured a little explanation. “If the author was responsible himself he would have condemned Saddam’s invasion.”

“Oh, I see, so that’s why you don’t like it because you don’t approve of its author, what is his name?”

“Well know. I can see you’re the type who only likes to talk about intellectual things, like your friend. So, for my own personal curiosity, do you mind answering a couple of questions, like what do you make of this revolution?

“Our revolution, what else? Khomeini’s revolution.”

“A journey of spirit.”

“I see. A journey of spirit. And what about all this bloodshed, the violence, that has gone hand in hand with it?”

“Well, it’s the stuff of heroes, isn’t it? Are you a doctor of philosophy teacher?” K. asked tersely, hoping his question would put an end to all this nonsense and yet was unsurprised that the good Dr. was not relenting and, instead, pressing harder.

“Trust me. I have read a lot of philosophy books in my spare time and I bet you would be seriously surprised if you knew how much philosophy I know. So go ahead and try me young man, ask me a philosophical question.”

“I have none,” K. whispered, feeling hungry and wondering if he should ask for some food instead but didn’t and spontaneously mumbled, “universal reason.”

“What did you say? Universal reason?” Dr. Assadi asked and, searching his memory, gave up quickly, “is there a universal reason? Or are we all stuck in our mini universe applying it the whole world?”

“Kant, Immanuel Kant,” K. answered with his eyes closed, roaming inside with the thought of Shirin, recalling his initial conversations with Dr. Assadi and other doctors who were completely settled on the notion, naturally fed by his family above all Fakhri, that his crazed attacks on his wrist were due to his lost love affair with Shirin, without having any clue that he was mainly concerned about reliving his childhood past and, perhaps, reuniting with his dead father, but was he really free from the deadly seductions of self-destruction wrought by losing Shirin, K. asked himself and, ignoring Dr. Assadi’s “good night,” started falling sleep, his mind now immersed in more esoteric questions – about Kant’s aesthetic reason in Metaphysics of Morals and the predicaments of modern man in moral deliberation with his almighty always presiding an internal court of justice. “How can I possibly deconstruct his theological constructivism?” >>>Chpaters 17