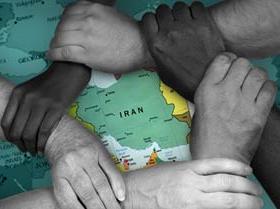 I was checking my email this morning and I ran across an advertisement on the Yahoo page that caught my attention. It was weird because the ads on Yahoo are usually for things like financial services or travel services or stuff like that, but this one was sponsored by a non-profit (501(c)3) group calling themselves “United Against Nuclear Iran”, UANI for short. Sounded fishy. I had to investigate!

I watched their nifty little video and perused their website trying to figure out what they were trying to accomplish by spending a fortune advertising on Yahoo’s website and making such fancy-shmancy videos and web stuff. If you are a non-profit, how do you have so much money?

The main figures featured in the promotion of the website, and the leadership of their group, includes former CIA leaders, big-wig think tank dudes, University smarty-pants, posh diplomats, and one very very sneaky but intelligent woman, who is about as close to our dear president, Mister George Walker Bush (AKA “Dubya”), as one can get. I am not sure that we could gather together a more closely-tied group to the Bush Administration if we tried. All of this under the guise of a “non-profit” group seeking to “educate” the public about the threats that Iran poses to the world with their “nucyoolar” power program.

The woman mentioned above is one Karen Hughes, who was a former member of Bush’s White House advisory council in 2005. She quit later when she could not convince the world to like Bush, but she made a couple of million bucks in a book deal about her time in the White House. Meanwhile, her political history goes all the way back to Bush’s dad and President Reagan. Karen Hughes saved Dubya’s ass in Texas when he was governor and more stupid, by helping him avoid publicity about his arrest for driving while drunk. Furthermore, Karen Hughes and Karl Rove got Dubya into the White House in 2000 by making him look great, and pretending to the public that Dubya had been in the Air Force when he was barely even in the Texas Air National Guard (when he was not AWOL somewhere else even during THAT stint). Anyway, you can not have anyone closer to Bush and his consorts than Karen Hughes.

As you can imagine, the other people included in the UANI leadership have heaping mounds of their own dirt that can be dug up and exposed in relation to their affilitation to the Bush White House, were we so inclined to sift through it all. Take my word for it that they are all Bushies and they are NOT the benevolent non-partisan non-profit-organization wielding saviors of the world that they claim to be.

I have an agenda with all this that I write…read on please.

Moving on, I read through the other stuff on their website. It is all propaganda about how the American people and the rest of the world needs to support UANI and to make sure the world knows the dangers of Iran, blah blah blah. Then I came across their Frequently Asked Questions page, where at the end they state that the people must donate money to their cause, write their politicians to pressure Iran, protest Iran’s actions and encourage divestment from Iran, all in order to make sure Iran does not get the atomic power that is supposed to save the future of mankind after oil has run out.

Here is where my agenda comes in. Instead of such inane pressures and tactics that have nothing to do with actual international policy changes and negotiations, why don’t we all (the readers of UANI’s page and my dear blog patrons) write UANI’s people, our politicians and think tank poop-schute patrons, and ask them to make the pressures on Iran REAL and EFFECTIVE. Here is what I mean:

Nuclear/Atomic technology and power is used all around the world. The sanctity of its beneficial uses is lauded and promoted in the United Nations. If we want to stop Iran from producing nuclear weapons, we must give a little more juice to the people who enforce international agreements on nuclear technology. That means give more money and power to the United Nations International Atomic Energy Agency, with enforcement capabilities. As simple as that. That way they can do EXACTLY what they have been doing in Iran thus far. Inspecting, demanding to see places that they have not been able to see and passing punitive judgements where they are hindered. Right?

Whoa, Whoa, Whoa! Hold your horses! Why would UANI and Dubya and every other powerful nuclear-powered and nuclear-armed country in the world oppose that idea? That idea, which is, incidentally, the one that would be more LEGAL and more ACTIONABLE. Why not? Because that would mean the IAEA would be inspecting the US military, Israeli military, British military, Russian Military, French military, German military, South African military, and so on, JUST LIKE THEY WOULD BE INSPECTING IRAN!

And what would happen? So long Depleted-Uranium armor-piercing rounds. So long new low-yield nuclear bombs. So long Lockheed. So long Boeing. So long BAE. So long Raytheon. So long Halliburton. So long General Electric. So long Rolls Royce. So long EADS. So long Carlile group. So long GLOBAL ECONOMY.

So let’s see, by advocating following correct and legal dimplomatic channels to resolving the issue with Iran, I would be promoting exposing the illicit nuclear and military activities of the world’s powerful countries (read: bullies), and possibly the economy of the known universe.

By following what UANI is asking us to do, we would be playing the same game Dubya and his masters (Cheney et al.) played when they led us into our quagmire in Iraq. I have said this before and I will say this again. Iran is a target for the Bushies, no matter what. They intend to attack Iran before their stint is through. They will attack Iran if it looks like it will keep them in power beyond their eight Constitutionally-alotted years, or if Obama is likely to win. They will attack Iran because Iran is playing at a stand-off for the Powers’ global hegemonic agenda. The tiny chess-piece that Iran is in their global chess game, is proving a little more difficult to move than previously thought.

All they need is OUR approval and they can go in like in Iraq. Without UANI and similar groups to coercively push for MORE WAR, the Bushies would have to face and answer to the broke-ass America that their policies created. They would have to actually fix the US economy, have all their friends GIVE UP POWER AND GO BROKE so that America can be economically functional again. Instead, they would rather keep adding to their power, use SCARE TACTICS and LIES to frighten the ACTUAL RULERS OF THE AMERICAN GOVERNMENT, THE PEOPLE, into submitting to their view, and supporting them in MORE WAR and MORE DEBT and MORE DEATHS and MORE MISERY!

Why else would they have the most powerful Intelligence Officials and Public Relations Tacticians in American History running UANI? They need to frighten the people enough to get their war before the November elections. Otherwise it might be too late. Then they would lose. Or so we hope…