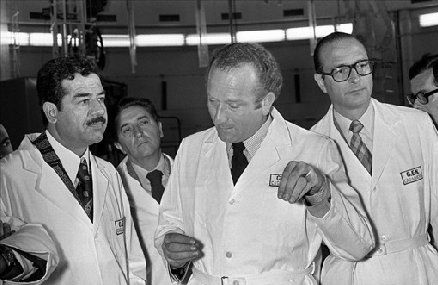 Iraqi dictator Saddam Hussein visits France’s Nuclear SACLAY installations with then Prime Minister Jacques Chirac ( with eyeglasses) in a bid for French nuclear technology. 1975-76. The same year the Shah had also visited the installations of SACLAY with French President Giscard d’Estaing. With the fall of the monarchy in Iran, Iran was attacked by Iraq and the two were to engage in an 8 year war (1980-88) using conventional military arms delivered to both countries by Western Arms Companies in competition in a bid for the most generous client.