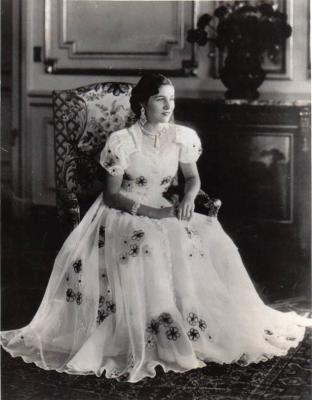 Princess of Egypt to Queen of Persia. Fawzia Bint Fuad of Egypt.(Alexandria, Egypt, November 5, 1921 – ) was the first wife and first Queen consort of Shahanshah Mohammad Reza Shah Pahlavi of Iran.

Known for her breathtaking beauty ( with a striking ressemblance to Gone With the Wind Film Star Vivien Leigh) , the Princess of Egypt and Sudan, Fawzia was to marry  Mohammad Reza Pahlavi (1919-1980), the Crown Prince of Iran, in Cairo, on March 16, 1939.after their honeymoon, the wedding ceremonies were repeated in Tehran. Two years later, the crown prince succeeded his exiled father and was to become the last Shah of Iran. She gave birth to a daughter Princess Shahnaz but the arranged marriage was shortlived.

She is currently Fawzia Shirin, having remarried in 1949 and having lost her royal titles after the Egyptian Revolution of 1952, although she is referred to as Princess out of courtesy. She is the most senior member of the deposed Muhammad Ali Dynasty residing in Egypt. Her nephew, Fuad, who was proclaimed King Fuad II of Egypt and Sudan after the Revolution, resides in Switzerland.