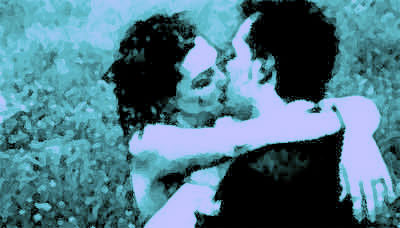 Chetori? I just received your email with all the photographs from Kian’s birthday. You guys all look so happy. Maman especially shone in her new dress. Did my favourite four year old enjoy his gift from Canada? I miss you all so much. I am waiting impatiently for the day when you will write me with the happy words “We are coming for a visit…”

Here, on the Northern front, things have been getting a bit frosty and I am not just talking about the weather. Nassim and I had our first fight. Yes, it took almost five months for the blissful, newly-wedded merry-go-round to hit a little snag. It happened last week, when my dearest parents-in-law threw yet another mehmani at their home. You know how those evenings go. This time, though, a couple of things were different right from the start.

First of all, Kati showed up. Usually, it is next to impossible to drag her away from her downtown pad to sit through one of these snore-fests. And as soon as she walked in, Nassim and her mom started arguing with her, quite seriously, about her appearance. Now they always tease her because unlike them, she is very natural. Hardly wears any make-up and almost always shows up in the same old pair of jeans. To tell you the truth, I have always thought she looks great. A natural beauty.

Anyways, this time, it went well beyond teasing. Actually, it got quite nasty. My wife and mother-in-law actually tried to force Kati to change but she refused, screaming at them to leave her alone. They screamed back. The maid got scared and turned over a pot of boiling water. That got Toussi barking like mad and finally, Aghaye K… had to run downstairs to get in between them. I was waiting for a full-on fistfight to break out but the proverbial doorbell saved the day.

The guests were Uncle Mehran and Auntie Mahin, along with their two brats who, mercifully, immediately sprinted to the basement to play their video games. And Mehri Khanoom, Nassim’s great-aunt, who is about 99 years old and can’t hear a thing but boy, does she ever like talking! In addition to them, we were treated to two new faces. Auntie Mahin’s cousin from out of town, Farideh Khanoom, a fierce looking woman of sixty who looked as though she was quite capable of using her cane as a samurai sword. And her son, DOCTOR Keyvan, a kind of geeky-looking fellow. (The emphasis on the title of DOCTOR by the way, was purely Farideh Khanoom’s, not mine).

Kati pouted through the whole evening. When asked any question, especially by the inquisitive Samurai-Mom, she would answer either by rolling her eyes, or sighing. Sometimes, she deigned to grace them with a monosyllabic response. She outright refused to go fetch the tea that her mom insisted she bring, going out instead for one of her many cigarette breaks. I could see my wife’s cheeks getting redder by the minute. As for my mother-in-law, she just stared at her younger daughter, her eyebrows moving up and down at a furious pace, like those funny Japanese cartoon characters.

Auntie Mahin and the Samurai-Mom looked at Kati and looked back at each other throughout the evening, their lips pursed like they had tasted something very sour, and a look on their face that could be best translated as “I told you so!” The awkward silence was filled by DOCTOR Keyvan, who decided to regale us with an impromptu seminar on the latest Botox injection techniques. What can I say? Another scintillating evening at my in-laws.

After dinner, I joined Kati out on the patio and asked her what was the matter. She turned her eyes towards me and I could see she was on the verge of tears. But it was with a bright smile that she told me:

— “Heechee. I am just throwing a wrench in my dear mom’s plans to marry me off to that loser.”

— “You know exactly who I mean. The asshole in the checkered coat who calls himself a doctor because he likes to prick wrinkly old ladies with his Botox needles.”

— “DOCTOR Keyvan? Why do they wanna marry you off to him?”

She shrugged her shoulders.

— “Who knows? Who cares? Anyways, I am out of here. Had enough of this shit.”

She stubbed out her cigarette and started walking round to the back door of the yard.

I accompanied her to her car. As she hugged me goodbye, she started suddenly giggling.

— ”Look!” She said, pointing to a black Mercedes-Benz parked in the driveway.

We both laughed uncontrollably for a few seconds. It was the kind of silliness that the more you try to stop, the more out-of-control you get.

That night, in our bedroom, Nassim was cursing her sister up and down.

— “The shame! The shame she has heaped on us!” She repeated acidly. “To behave that way in front of the guests. And then, to walk out without even saying good-bye!”

— “Would you rather she had stayed and let the good DOCTOR use her for one his Botox demonstrations?” I asked nonchalantly, lying on the bed, my eyes fixed on the ceiling, while Nassim walked back and forth in the room like a caged lioness.

Oh, boy, that was the wrong thing to say. I should have just shut up. As soon as I uttered those words, my wife went on some sort of cataclysmic melt-down, telling me I was no better than her rude sister, that I should have at least tried to talk some sense into her, rather than send her on her merry way. She accused me of always standing up to Kati’s defense, of never taking her side on any issues. She spat that I had no right to get involved in “her” family matters, especially as I did not know the background story or how much Kati had put the whole family through the years.

— “She has made us the scandal of the whole town, over and over!”, Nassim cried out bitterly, “And now, she has blown away a great opportunity, a good man, a doctor, from a good family, and look at how she acted. I cannot ever look at Mahin Khanoom in the eyes again.”

— “Don’t blame Kati for that my dear. Your auntie Mahin is so cross-eyed, I don’t think anyone has ever had the pleasure of looking at her that way.”

And with that, I was sent to that island where all the naughty husbands end up: The Couch. My peaceful exile unfortunately ended way too soon. It only lasted til about one in the morning that very same night, with a teary Nassim and her ever-loving arms wrapped around me, begging for my forgiveness at her temper.

I know Payam jan, I should not have played with fire like that. But one, I just found the whole melodramatic act of Nassim so comical, I couldn’t help it. And two, I was a bit stung, the way she referred to “her” family matters. I thought a husband was part of the family, no? And I don’t know where she got all that garbage from, that I supposedly always stand up for Kati. When does the subject of her sister ever come up in our conversations for me to take a stand like that?

If she means that I don’t join in on her teasing Kati for the way she dresses or chooses to live her life, or that I don’t want to push her to marry some unknown DOCTOR guy who is being chaperoned at the age of forty-five by his old samurai-mum, then I guess, she has a point. But really, women can be so tiresome sometimes. I am already bored by this entire pointless letter.

Sorry to have wasted your time with this old woman’s gossip but such are the trivialities of my married life nowadays that an incident like this takes up the better part of an email that I should have been spending asking about all of you. With that, I beg you to write me very soon and do please send me more photos of my dearest Kian and Kimia Khanoom.