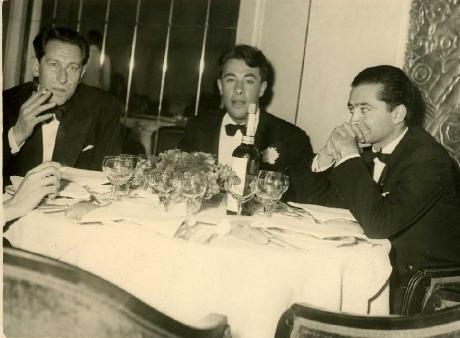 Farrokh Ghaffari (1921 – 2006) , film critic and filmmaker in a Restuarant in Paris with French colleagues. He is the one with hands crossed in front of his mouth. Ghaffari is considered as the father of the Iranian New Wave cinema as we know it today already before the Revoluton with his very personal style and outlook. Ghaffari created Iran’s First Cinemateque in the early 60’s  after having worked on the French Cinemateque with Mentor Henri Langlois (Langlois received an Oscar for his contribution to the preservation of cinema) .

His two most famous masterpieces were Jonoubeh Shahr and Night of the Hunchback. He was the son of Hasan Ali Khan Moavendolleh and was raised in Paris and Belgium where he also completed his film education. Before the 1979 Revolution he was one of the directors of the National Iranian Radio and Television and the General Director of the Shiraz Arts Festival.