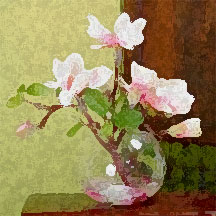 Lily Flower had never worked in her life.

She was the last member of Flower family, well-known in Hustonville, Tennessee. At ten, her parents called her their little genius. She could sing the most difficult tunes and play the most complex songs on the piano.

At sixteen she dreamed of being a famous actress, but her parents died in a car accident and she inherited their fortune at twenty-four. Once the time of her grieving was over, she sold everything, left her hometown and moved to New York.

She lived in a luxury house at Soho for the first six years, but the day she realized nobody had ever recognized her talents – except for her parents- she moved to this apartment building.

“No pets allowed”. The concierge told her on the first day she moved in. But she didn’t care. Young and hopeful, “I’m going to get married,” she had thought. “Who needs a pet?”

Twenty-five years had passed, but the management hadn’t changed their mind.

Lily had moved from the third floor to the sixth and then to the forth. Suite 43 East. This one was the smallest. Her kitchen was as large as her old refrigerator. So she sold it. Her couch filled half of her salon. The old TV was too big to fit in. She sold it too.

She spent most of her time in her bedroom. It had a balcony and faced a wall.

She lived a tedious life.

Lily Flower knew everyone in the 4th floor. Even if all her neighbors called her with her last name, she always hoped one day they would remember her as Lily.

She had so many friends, but the day she turned fifty, she knew her life was going to be glorious, only if she had owned a dog, or even a fish.

One day, when the boredom of existence engorged her dreams, she went to the library and paced through the aisles aimlessly. At the end of the 19th century Literature books, as she skipped modern Philosophy, she reached the Botanic section. Out of breath, almost randomly, she grabbed a book.

It was about Magnolias.

Leafing through the colorful pictures of Magnolias, planted in green gardens with rich soils, blossomed on spring days of childhood – places she had forgotten about their existence, almost like a foreign land she wasn’t aware of its name- dizziness wrapped her old body with a rare perfume. This desire brought tears to her eyes, tears of happiness.

It was the moment Lily Flower decided to grow her own magnolia.

Everyone told her it wasn’t possible for Magnolias to survive in such a small space, in such a tiny vase, in such a dark place.

Lily remembered how she used to be stubborn.

She watered the soil and learned about fertilizers, herbicides, and pesticides. She studied the movement of sun and moon, and fought with the effect of killer winds on plants. She dreamed of drought and of storms. She battled with seasons and with time.

As her magnolia surpassed the expectations, and rose timidly out of the soil that represented pain and perseverance, Lily’s closet friends from Santa Fe Apartments turned into acquaintances.

“It wouldn’t have survived without me,” she liked to brag.

Her view from the bedroom transformed from the obscurity of grayness to a vivid green and purple – authentic and embryonic- similar to the color of lands she had abandoned. She was embraced by this reminiscence, exulted by this new being, cherished by plant’s livelihood.

“It’s just my Magnolia that keeps me alive,” she told a stranger on the phone.

Magnolia grew tall and turned into a tree. Its flowers hung over the neighboring terraces and its leaves hid the facing wall. Birds nested inside its abundance and hungry snails crawled over its blooming fruits. Its large trunk filled the whole balcony and its branches reached the skies beyond Lily’s view.

There was no more room for Lily to stand by her tree.

No more room to reach its roots.