Neither Iranian nor American 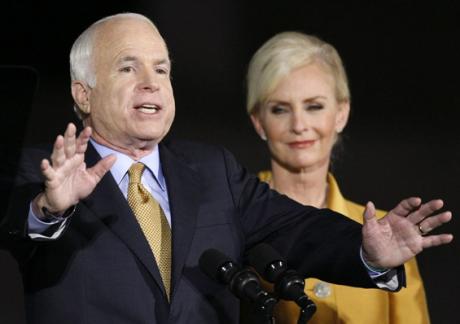 There is a well known maxim often delivered from the top of pulpits or from behind the podiums: Be Humble in Victory and Gracious in Defeat. John McCain in his concession speech which was delivered as soon it was clear that he had lost the key swing states of Ohio, Pensylvannia and Flordia, rose above the political differences and proved that for him the Country was First. In his speech, John McCain showed the generosity and grace expected from an all American hero. Against a barrage of boos from the disapproving supporters in the audience he declared:

“The American people have spoken, and they have spoken clearly. A little while ago, I had the honor of calling Sen. Barack Obama to congratulate him.”

Amid jeers of discontent for McCain’s suggesting honor in conceding defeat to Senator Obama, he pleaded with the crowd:

“Please…. Whatever our differences, we are fellow Americans, and believe me when I say no association has ever meant more to me than that. It is natural to feel some disappointment, but tomorrow we must move beyond it and … get our country moving again.”

“These are difficult times for our country and I pledged to him tonight to do all in my power to help him lead us in the many challenges we face,” McCain said. “I urge all Americans who supported me to join me in not just congratulating him, but offering our next president our good will.”

He humbly accepted the blame for the short falls:

This was the best manifestation of the great Ameican spirit and values. Gracious in Defeat!

Shortly afterwards, in his vitory speech, Mr Obama reminded us of another great American trait: Humility in Victory.  He praised and invited McCain to join him in improving the country:

“A little bit earlier this evening, I received an extraordinarily gracious call from Senator McCain. Senator McCain fought long and hard in this campaign. And he’s fought even longer and harder for the country that he loves. He has endured sacrifices for America that most of us cannot begin to imagine. We are better off for the service rendered by this brave and selfless leader. I congratulate him; I congratulate Governor (Sarah) Palin for all that they’ve achieved. And I look forward to working with them to renew this nation’s promise in the months ahead.”

The President elect Barack Obama reminded his massive audeince of the great spirit of unity and friendship that is the zenith of the American value system in these powerful words:

“It’s the answer spoken by young and old, rich and poor, Democrat and Republican, black, white, Hispanic, Asian, Native American, gay, straight, disabled and not disabled, Americans who sent a message to the world that we have never been just a collection of individuals or a collection of red states and blue states. We are, and always will be, the United States of America.”

I went through this length to emphasize on what being an American hero means. There is also an equivalent concept at the core the Iranian value system. In colloquial terms it is called lootigari or in a more formal language, javanmardi. These terms refer to the most revered and respected values of Iranianness: Being magnanimous when in power.

And yet, the writings and the mean spirited behavior of a group of so-called Iranian-Americans on this site is neither American nor Iranian. They have got plenty to learn from their chosen leaders.