The Rise of Apocalyptic Islam 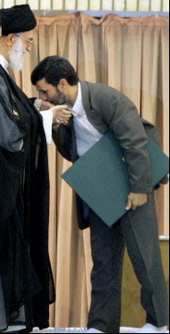 Jean-Pierre Filiu
Washing across the Islamic world is a growing wave of grim and gory literature predicting the aher al-zaman, the Arabic concept for apocalypse that literally translates as the “end of time.” This genre is both ancient and modern, as it revisits historic Islamic narratives and incorporates newer, non-Islamic elements. Three trends of apocalypticism have emerged from this literature, making it difficult to assess the implications for foreign policymaking.

Both Sunni and Shiite Islam contain traditional narratives about the end of days. In the Sunni narrative, Jesus returns to fight the anti-Christ in Damascus, defeats him in Lud, and leads the army of the faithful at the end of time. In the predominant Shiite narrative, the occulted twelfth imam, also referred to as the “Hidden Imam” or Mahdi, will appear in Mecca and lead the Mahdi’s Army, defeating the unbelievers. In contrast to these old narratives, the current wave of apocalyptic literature draws heavily from non-Islamic sources. This heterogeneous genre follows the approach of its founder, a minor Egyptian journalist whose 1986 book The Anti-Christ incorporated Biblical revelations, Nostradamus’s prophesies, anti-Semitic propaganda, and Protestant evangelicalism.

As the majority of its readership does not interpret apocalypticism literally, the genre’s rise does not represent an immediate political threat. Instead, apocalyptic literature is a coping mechanism for day-to-day frustration. It helps “compensate” for the current economic and social crises by associating them with the foretold decline of Islam before the end of days. Without motivating the reader to any particular action, it promises retribution against the perceived evildoers and a post-apocalyptic recompense: the rise of Islam, justice, and peace.

Despite the predominance of apolitical apocalypticism, two smaller trends use this same propaganda for political gain. “Apocalyptic opportunism” is embodied by militia leaders like Muqtada al-Sadr and Hassan Nasrallah. These leaders lack strong religious credentials and may not be Mahdists themselves, but they use this literature to challenge established religious authority and reach out to the Mahdists for political support. Although more commonly affiliated with Shiite Islam today, this opportunist use of apocalypticism has been a characteristic of both Sunni and Shiite insurgencies in the past.

The third trend, “apocalyptic vertigo,” poses the most direct political threat, as it employs apocalyptic literature to support violence. It is visible at the margins of al-Qaeda, especially in the agendas of Abu Musab al-Zarqawi and Abu Musab al-Suri, whose publication, The Call for a Global Islamic Resistance, includes a hundred-page apocalyptic tract. The most cohesive and clearly apocalyptic movement is the Ansaar al-Mahdi militia in Iraq. Their leader, Sheikh al-Yamani, claims to be the vanguard of the Mahdi and has demanded allegiance from Grand Ayatollah Ali al-Sistani and Iranian president Mahmoud Ahmadinezhad. Even after losing its strongest supporters in a 2007 bloodbath in Najaf, Ansaar al-Mahdi remains a serious threat. The mutual rejection of these two movements and Ansaar al-Mahdi’s extreme anti-Iranian stance diminish the likelihood that a combined apocalyptic movement will form.

Mehdi Khalaji
Ahmadinezhad is responsible for much of the rise in the apocalyptic trend’s popularity and visibility in Iran. Prior to his election, Iranians knew very little of Ahmadinezhad’s religious mindset, and he never mentioned Mahdism during his campaign. After taking office, however, he began supporting institutes working with the apocalyptic ideology and included prayers for the return of the Hidden Imam at the beginning of every speech. Still, Ahmadinezhad’s apocalypticism is a greater threat to the religious establishment of Iran than to the West or Israel.

The apocalypticism of Ahmadinezhad and his close circle is distinct from the narratives of traditional religious authority. Ahmadinezhad’s primary influence is Ahmad Fardid, an Iranian philosopher who attempted to reconcile Islamic concepts with Martin Heidegger’s philosophy. Some of the hardliners in Ahmadinezhad’s group are direct transfers from Fardid’s circle, while others are German-educated intellectuals and activists with connections to the neo-Nazis. This group rejects outright the authority of traditional clerics and does not include any prominent clerics among its ranks. However, as university graduates who are ignorant of the methods of Quranic interpretation and exegesis, they rarely express their radical apocalypticism publicly.

With the failure of Islamic ideology to respond to social needs, apocalyptic ideology appealed to Iranians. Suffering from economic, social, cultural, and political crises, religion became the people’s only refuge. After thirty years of revolution, many Iranians were tired of the Islam associated with the clerics and the government. Instead, they sought a simple, ritual version. Apocalypticism became a form of political resistance.

This context explains the recent popularity of religious sites such as Jamkaran Mosque near Qom. A hundred years after the Hidden Imam appeared in a dream and ordered it built, it remained a simple one-room mosque. With the rise of Mahdism in the last decade, however, it has become very important. A reported 16 million Iranians visited it last year, even more popular than the Imam Ridha shrine in Mashhad, the mosque of the eighth imam. During the same period, the number of people claiming association with the Hidden Imam has increased, signaling both widespread social frustration and a desire to capitalize off of these feelings. Before Ahmadinezhad’s presidency, contact with the Hidden Imam was personal and private; now, it has become socio-political and public.

Ahmadinezhad’s rejection of clerical authority and the rise of a new apocalypticism prompted a strong response from Shiite clerics and Iranian politicians. Former Presidents Rafsanjani and Khatami, prominent cleric Dr. Hassan Rowhani, former Speaker of the Majlis Akbar Nouri, and others have rejected this popular apocalypticism as dangerous and non-Islamic. Two months ago, Supreme Leader Khamenei condemned these trends, citing the prohibition on claiming credit or benefiting from contact with the Hidden Imam. Khamenei follows the anti-apocalypticism of the Iranian Revolution, which rejected the need to wait for the Mahdi before establishing an Islamic government. His attitude toward Ahmadinezhad is complicated; he wants to maintain executive control and pacify the clerics, but he cannot allow Ahmadinezhad to collapse. The “sky of Iranian politics should [only] have one star,” but political instability would harm the Islamic Republic’s reputation.

Despite Ahmadinezhad’s threats, Iranian apocalypticism should not be of major concern to foreign policymakers. Ordinary Iranians are largely unaware of the Mahdist trends in Iraq, so it is improbable that a concerted apocalyptic effort will form. Ahmadinezhad’s increasing radicalism and disastrous economic policies have eroded his popularity and political power. Artists and intellectuals despise him for controlling the cultural machinery, and the Majlis has started to interfere with his political appointments. Apocalyptic political trends are in decline, and even Ahmadinezhad has tried to disassociate himself from these trends and deny his previous statements.

This rapporteur’s summary was prepared by Larisa Baste. View this PolicyWatch on our website.