I generally don’t like to talk about my photographs.  It’s best when viewers have their own take on what they see, but in this case I would like to share an observation. I have been looking at these pictures for some time and there is something unsettling about them.  There are two forces at play in my mind. One is the history of bull fighting.  The other is what I actually observed during this event.  Let me explain:

The history of bull fighting:

I am not a historian, but based on what I gathered  from my conversations with the guide, the roots of bull fighting go back to the 11th century when Moorish forces invaded Spain. The Moors stampeded bulls into enemy front lines shouting, “ALLAH, ALLAH, ALLAH”. The Spaniards quickly learned they could manage the bulls by using a red cloth, hence a sport was born. As you have probably guessed, the word, “ALLAH” evolved into the word, “OLE”.  During the Moorish occupation of Spain, bull fighting was banned, but was enjoyed privately by the Spanish aristocrats.  After the Spaniards kicked the Moors out of Spain, Bull Fighting became more popular and it is now a prominent aspect of Latin life.

Three or four bulls are  killed during each event. The process is much the same each time.

Act I – Warm Up: A bull charges out of the gate and into the ring with awesome power.  It runs from side to side looking for something to attack.  This excites the fans.  For the first 10 minutes, the Matadors’ assistants play with the bull until he is tired.  At this point another assistant shows up on a padded horse holding a lance and cuts the skin between the shoulders of the bull.  This allows the matador to stick knifes into the bull’s back.

Act II – The dance:  At this stage the matador enters the ring and for about 20 minutes uses his cape to dance with the bull. Every time the bull charges and misses, shouts of “Ole” arise from the crowd. After a while, the bull is too tired to chase the Matador. This signals the final act.

Act III –  Death:  The matador taunts the bull into charging him one last time, and then drives a long and narrow sward with a bent tip between the shoulder blades of the bull into his heart.  This requires some skills. The bull stands still dazed for 2 minutes while it experiences massive internal bleeding. The Matador walks around the ring basking in cheers from the crowd. Occasionally, he bends down to pick up a bouquet of flowers thrown to him by the fans and strikes macho-ballerina poses for them, The crowed goes wild. The bull drops to its knees. After another minute or so of struggling for his life, his head hits the ground. He is dead.

If the beginnings of this sport were based on a tactic for resisting foreign invasion, then the whole thing could be seen as a kind of a victory dance, but seeing the pain and humiliation of the bull, I had to wonder, “victory over what?”

This bull fight took place in Mexico City. 12 next › last » 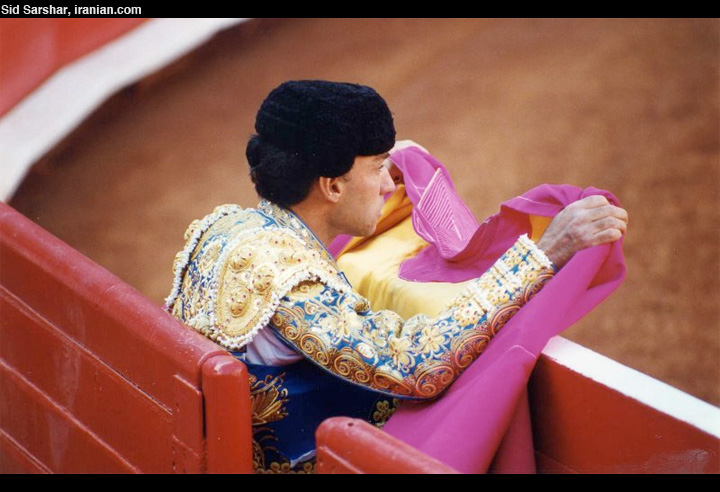 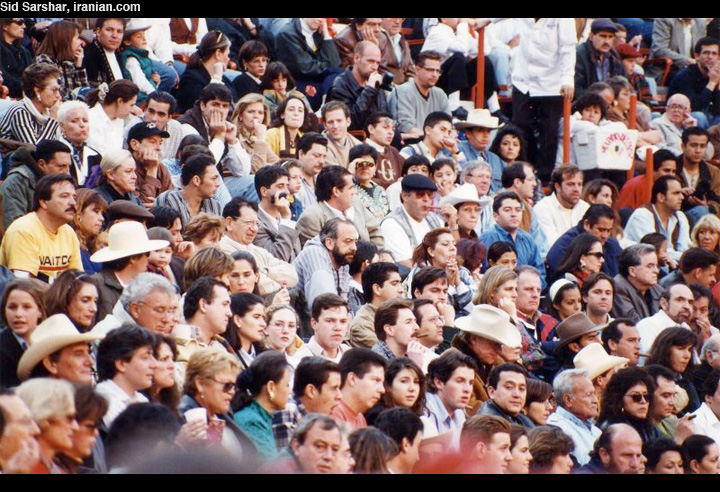 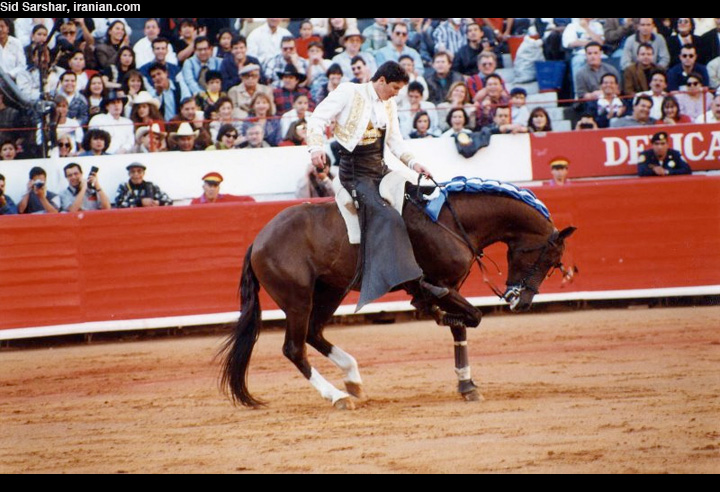 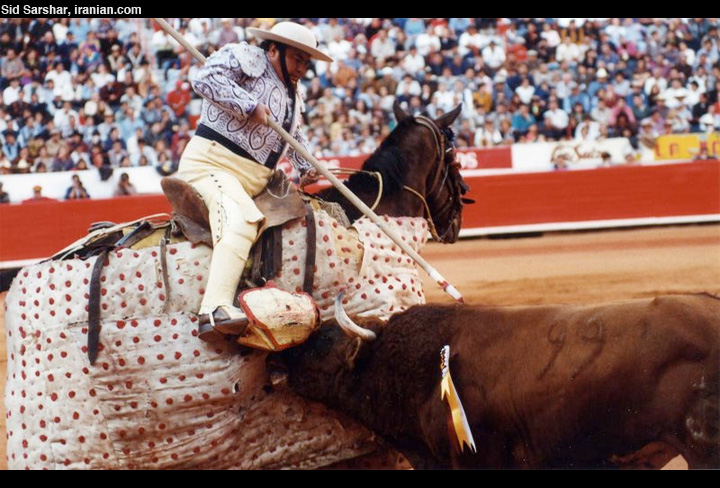 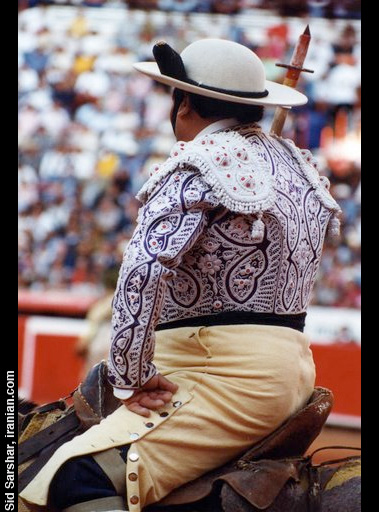 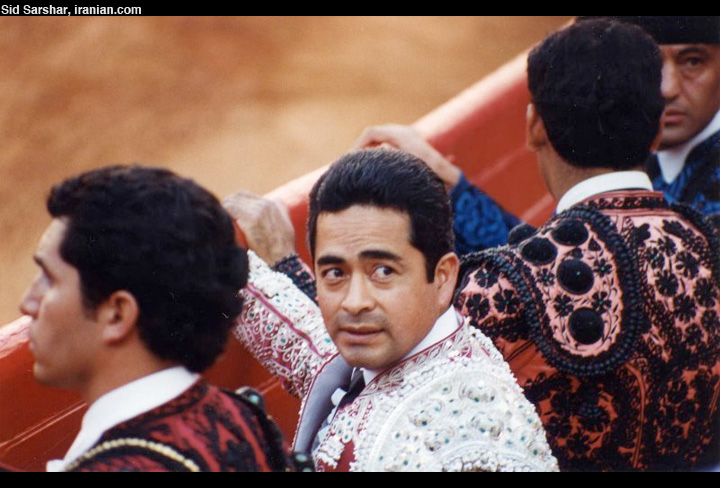 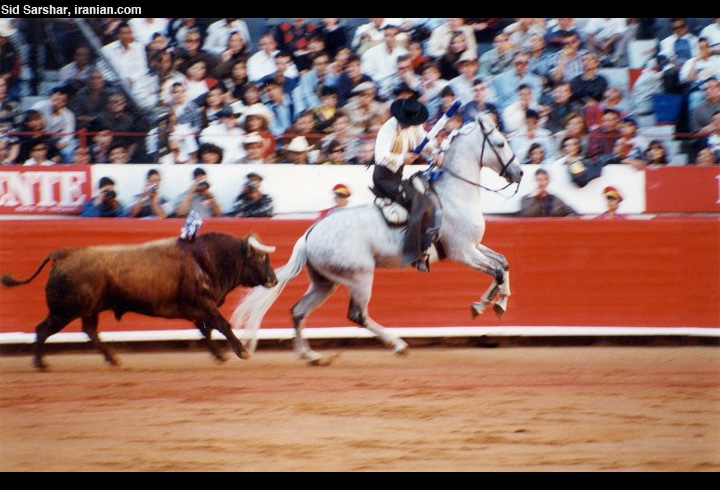 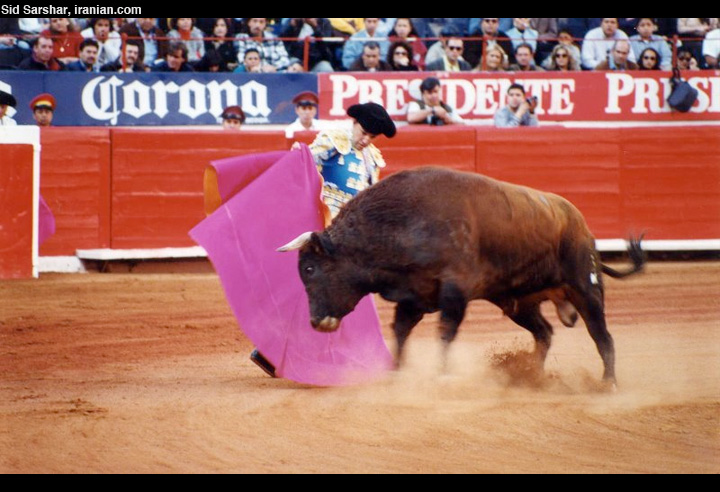 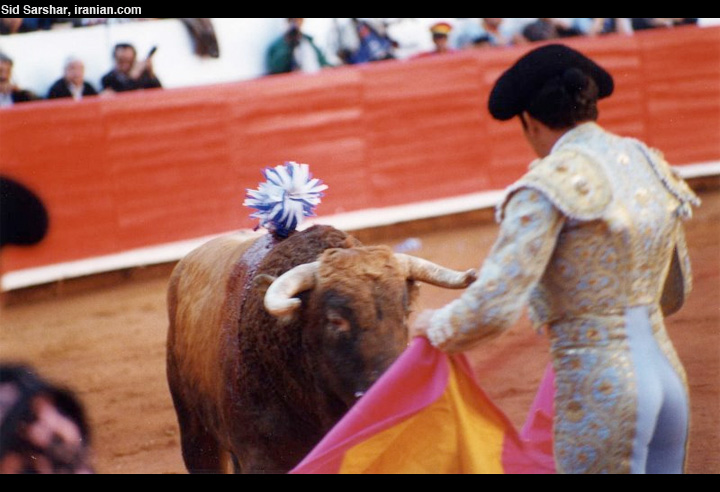 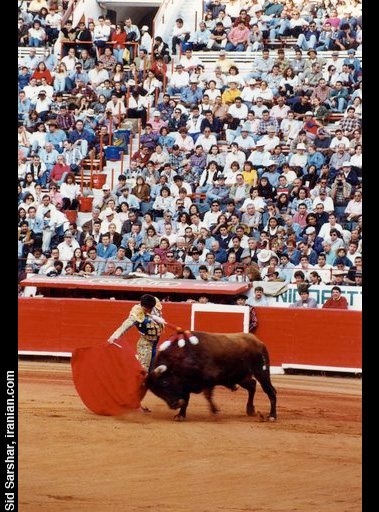 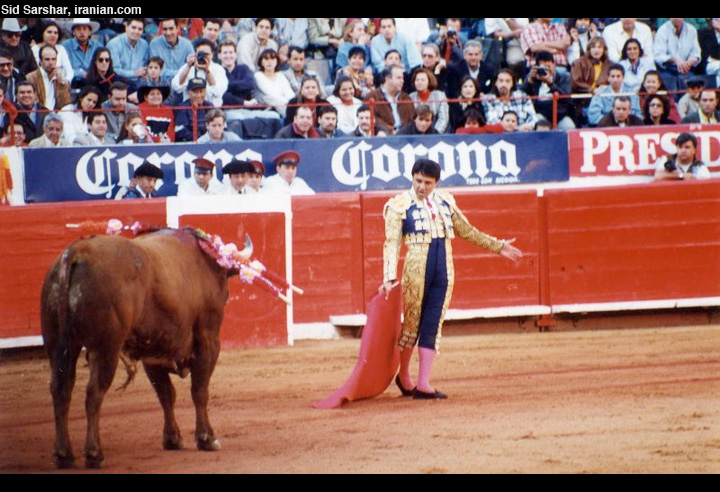 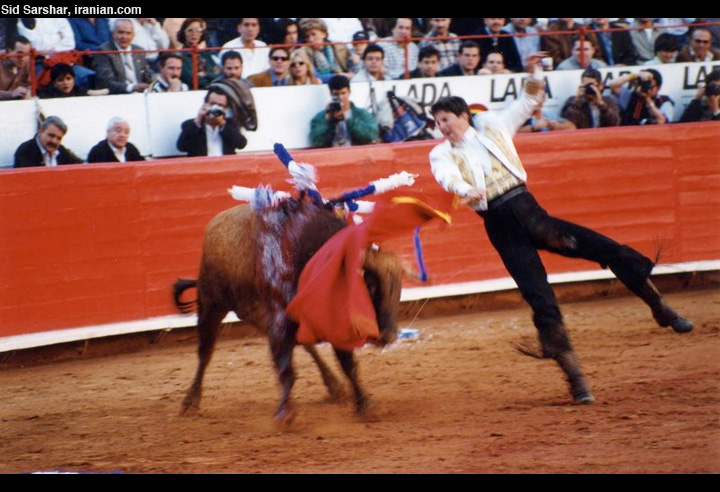 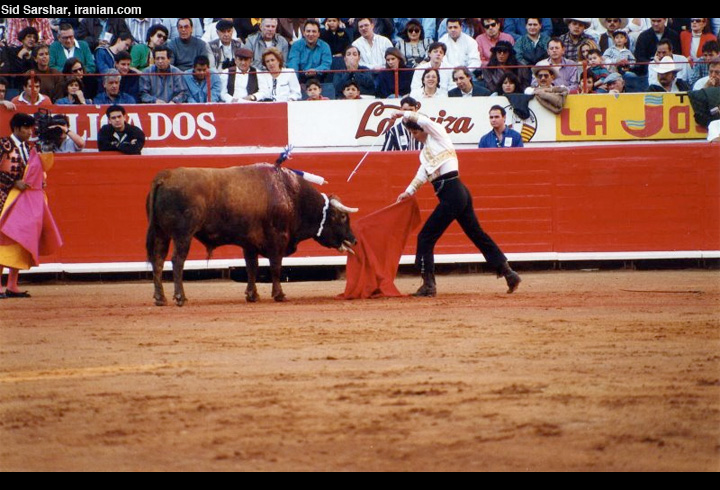 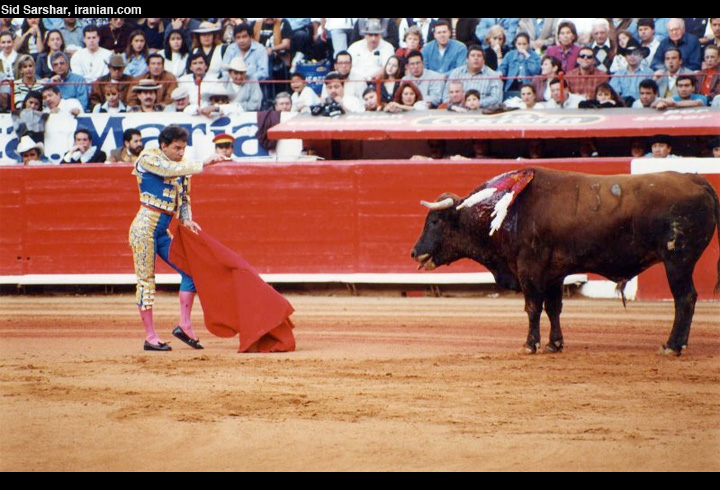 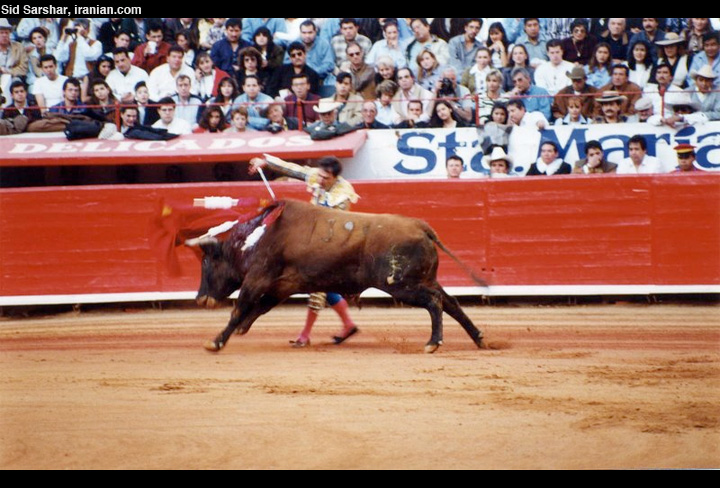 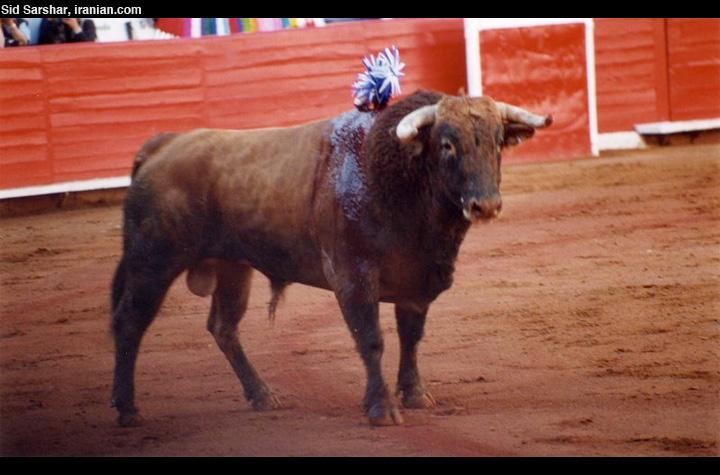 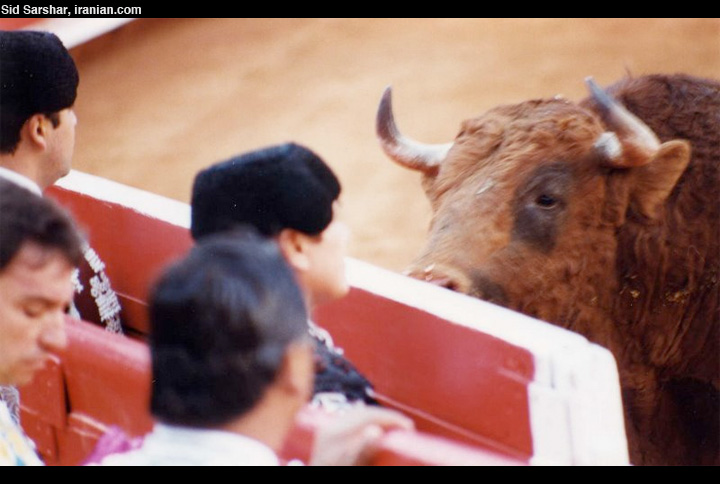 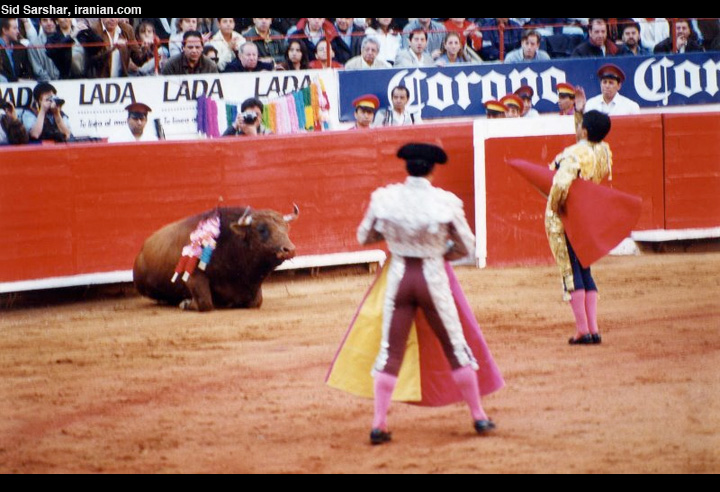 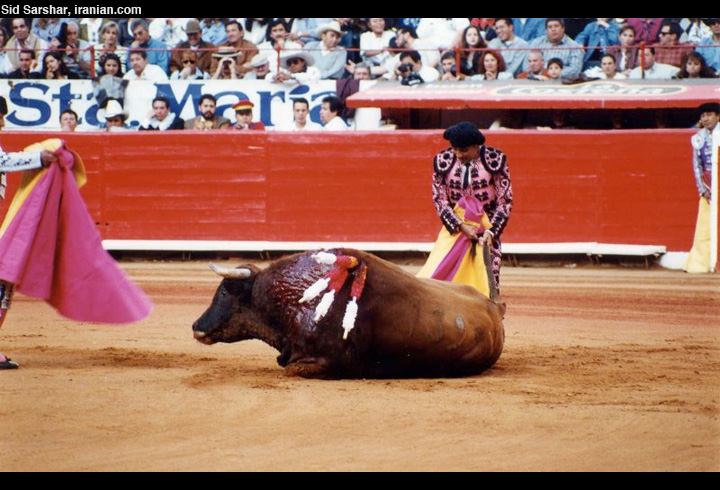 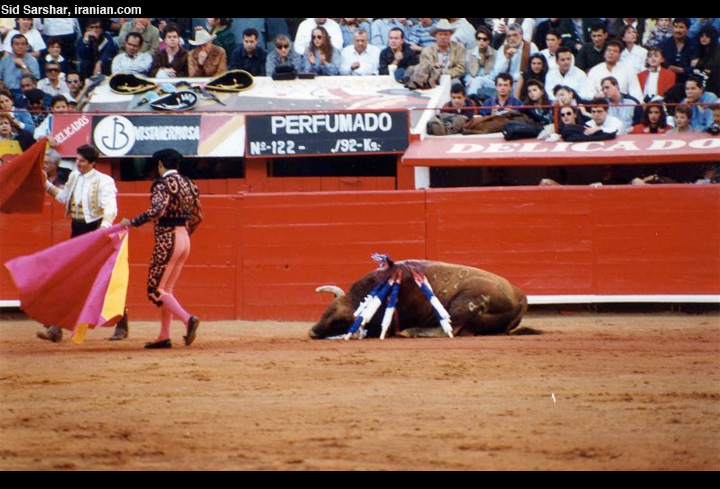