Once there was a legend… 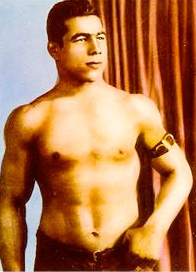 My sixteen-year-old cousin Shawn has no notion or understanding of his father’s culture. Born to an American mother and Iranian father, Shawn is an all-American boy with an all-American girlfriend and an all-American lifestyle. Shawn is his high school’s star quarterback, plays a mean guitar, he is the Capitan of the debate team, listens to rap, shaves his head and wears baggy pants.  He gets good grades and collage football recruiters are falling all over each other to get their hands on him.

Shawn does not speak a word of Parsi. Like many American teenagers born to an Iranian parent, Shawn has no interest in his father’s background. Shawn shies away from anything that might link him to his Middle Eastern roots.

While visiting my uncle the other day, I walked into Shawn’s bedroom and noticed a picture on the wall that seemed oddly out of place next to posters of Tupac, Rage Against the Machine, Tom Brady and the stars of the movie Ocean Eleven. The picture belonged to Gholamreza Takhti.

I asked Shawn if he knew who Takhti was. Shawn replied, “Yup, he was a cool dude.”

I told him that Takhti was a legendary Iranian wrestler. Shawn shrugged and replied, “Wrestling ain’t my thing.”

That encounter with Shawn made me understand the magic of Takhti. Takhti’s greatness in the eyes of Iranians had nothing to do with wrestling.

In a nation filled with hopelessness, undesirable characters, drug addicts, corrupt profiteers, insincerity, mediocrity, hypocrisy and unfulfilled craving for heroes, Takhti represents everything that we Iranians are longing for: clean-shaven, strong, gentle, calm, pleasant, trustworthy, handsome, athletic, with a smile that went on forever.

Takhti’s effortless coolness, restrained ego, grace and dignity made him our favorite son. What stood him out from the rest of the pack was not so much the size of his biceps or the way he wrestled his opponents, but the size of his character and his uncompromising discipline—which are things that lack greatly in our culture.

As the children of a defeated nation who experience daily humiliations, Takhti’s legacy stirs our deepest sense of individuality and national pride. And as we Iranians practice our god-given talent for playing the victim, Takhti’s glories and defeats, virtues and shortcomings and most importantly, his self-confidence inspires us.

Now, get your hairy-monkey-ass to the gym…