10 similarities between Israel and IRI 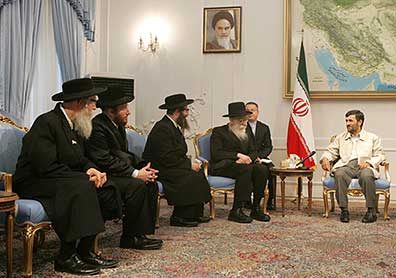 Similarities between the Jewish state of Israel and the Islamic republic of Iran show that, there are many paths to ruthless conduct. Funny or tragic enough, each of those regimes uses the other to justify its cruel actions, oppress its dissidents and minorities, and frighten the public of the bogeyman!

1. Both are religion-based regimes, rooted in ancient Mesopotamian mumbo jumbo;

2. Both have large population of non-believers, who suffer in the hands of the more radical, vocal and organized zealots;

3. Both pursue a systematic suppression of ethnic and religious minorities;

4. Both have notorious secret services that are often accused of cruel acts of torture and murder;

5. Both have aspiration to lead the world, as a group of ‘chosen people’, with whom god has made a special covenant;

6. Both await the emergence of a messiah who will transform the whole world into a mono-religious “paradise”;

7. Both have parliamentary systems, but ones that disenfranchise large portions of their population;

8. In both countries, the leaders claim to be holier-than-thou, but are often revealed as rotten corrupts;

9. Non-believers in both countries are harassed, e.g. women with revealing clothes, or men thought to break religious laws (drinking in Iran, driving on a Saturday in Israel);

10. Both have clandestine nuclear programs, which have either resulted in weapons of mass destruction or are on their way to it.

Continued from the following blogs: