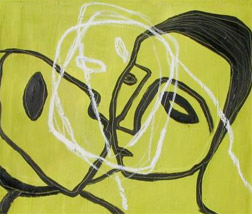 From the “Kissing All The Frogs” Series*

Maryam loved Babak and Azita. They were her best friends in the world. Babak had been her first friend in the US, when she had first arrived from Iran. She and Babak had gone through college together, had helped each other through some rough time, and had celebrated each other’s weddings. They had also helped each other through their divorces. They could talk about anything and everything, politics and arts and gossip, and they never grew tired of each other’s company. Luckily for both of them, the men and women who had entered each of their lives seldom felt threatened by their deep friendship. Maryam was so happy to see Babak’s life brighten up when Azita entered it. Mature adults and professionals, lovely and compatible together, they were a joy to watch and to have around. Maryam was so happy Babak had finally found the true love of his life, a woman who could keep up with him and present excitement for him. Over the past five years, Maryam had seen them meet, fall in love, date, and finally move in together three years ago. Babak had quit his job two years ago to start a new business with his partner, Homayoon. By all accounts and evidence, it seemed like their business was thriving and doing well.

Maryam hadn’t seen Babak in three months. Yes, she had seen him, but not really. She hadn’t been able to talk to Babak. He worked long hours quite a distance from where she lived, and seemed to keep really long hours at work. The few times she had seen her friend had been at busy and noisy events, never having a chance to chat. Their smaller gatherings were all missed by a working Babak, and were only attended by sweet Azita who always told Maryam how much she missed doing things with Babak, and how much she hoped for the business to reach a point where Babak could have a replacement some of the time, so that they could go back to their lives, taking trips and sleeping in on the weekends again.

That night when Maryam finally saw Babak at a gathering with other friends, she couldn’t resist telling him off for having ignored her for three months!

“Bah Bah, Bi Marefat! Where have you been?!! I miss you so much!” Babak looked so tired, so haggard. He was sporting a short beard which made him look gaunt and older all of a sudden. And what was that look in his eyes? Maryam knew instinctively that her friend wasn’t happy. What was it? The business? The economy? She tried to cajole him into a discussion: “The whole world has changed since the last time I saw you! I have missed talking to you about it! You never return my phone calls, either! What’s up with ya?” Babak reached for Maryam’s arm and said: “Hey, how about a cigarette?” Maryam obliged and grabbing her purse, the two of them stepped into their friends’ balcony and shut the sliding glass doors behind them.

Babak wasn’t saying anything, so Maryam went on complaining about his having ignored her for weeks. She was about to continue teasing him mercilessly when she took note of her friend’s facial expression again and knew this time with certainty that something was really wrong. So, she said: “Babak, are you O.K.?” Babak said: “No, I’m not O.K.” Maryam said: “What’s wrong? What is it? You know you can tell me anything.” Babak said: “I’m not so sure of that! There are things I have been wanting to tell you, but I couldn’t. I didn’t think you would take them very well.” Maryam said: “Since when?! You know we have always been able to talk. Just tell me what it is. Maybe I can help you.” Babak said: “No one can help me. I’m in a mess.” Maryam said: “Is it your business? Your loans? Your health? What is it, you’re killing me!” Babak said: “No. It’s none of those.” And before the silence that fell was further extended, he said: “I love someone else.”

Maryam was speechless. Through the glass door she could see their friends gathering around the dining table, talking and laughing. She could see sweet Azita, with her gorgeous hair and exquisite face surrounded by others. She said: “How long has this been going on?” Babak said “Six months.” Maryam said: “Does Azita know?” Babak said: “No. She doesn’t know. But I want to tell her. Soon.” Maryam’s heart was racing. She said: “No, don’t rush it! Wait! Who is this other woman? I mean it doesn’t matter who she is. What I mean is does this other woman know that you love her? I mean are you guys having an affair, or is it just an interest, an infatuation, something in your head?” Babak said: “It’s past all those stages.” Maryam said: “Are you sleeping with her?” And Babak shook his head, yes. Maryam said: “So, that’s it? You want to leave Azita for this other woman? You love her, Man! And she loves you! You guys have been through so much together for five years! You guys are so perfect together! In all the time I have known you, you never seemed happier than the years you have been with Azita. Why would you want to ruin all that?” Babak wasn’t saying anything. Just standing there, taking deep drags on his second cigarette, and looking miserable. Maryam said: “So, have you already discussed this with the other woman? I mean have you guys planned it so you would leave Azita and the two of you would get together? I guess I’m trying to find out whether this is ‘final?’” Babak said: “We can’t do anything yet.” Maryam said: “Oh really?!! It sounds like you have already accomplished a lot! What do you mean “we can’t do anything yet?” As Maryam was saying this, she was hoping that the situation wasn’t really concrete, that this was just a passing affair, and that Babak wasn’t going to take any further steps to ruin his life with Azita. Babak said: “She can’t join me yet. She is married.”

Maryam’s face was burning. Her palms were sweaty, and her heart was beating too fast. She said: “Babak, what’s wrong with you, Man? You are in a long-term relationship with one of the nicest people I have ever known, and you have to ruin it by having an affair with a married woman!? Jeez, talk about complicating your life! Obviously, the two of you must have been unhappy in your relationships or why would you even contemplate having affairs which would hurt so many people in the process? But couldn’t you each seek some couples counseling and try to sort things out with your partners? It just seems like such a lot of heartache my friend.”

Babak said: “Are you going to preach or are you going to help me? I love Azita. I don’t want to hurt her. I just don’t love her as my lover anymore. I love another woman. I want to help her leave her husband, so that the two of us can be together. But things are really messy, really complicated. I am risking so much for this. I need help.” Maryam said: “Risk? What risk? Do you mean hurting Azita’s feelings? I think you’re past that even if she doesn’t know it yet.” Babak said: “Well, no, I was talking about losing my business.” Maryam said: “Losing your business? How? You think Azita will come after your money? Why would you even be thinking that right now? She doesn’t know anything and her whole world will be coming to an end soon. And you’re thinking about your business?” Babak said: “I don’t think Azita will harm me that way.” Maryam said: “But you said you’re worried for your business.” Babak took a deep sigh and said: “The woman I love, the one I want to marry, is my partner’s wife.”

The sliding doors opened to deliver two other smokers into the cool evening on the balcony. The silence was deafening.

* Names, places, and other identifying attributes of this series’ characters are made-up and a work of fiction. The relationship and the dilemma at the heart of each story is true and that’s all that is true.