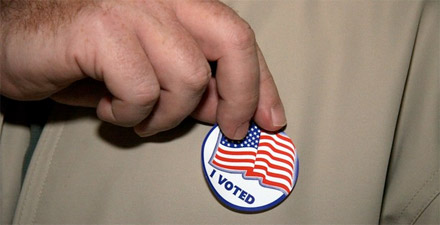 The 2008 presidential elections has been said to be historical, a shift in American politics. It must have been a unique and personal experience for many, including the Iranian American population. I went to the Student Union at the University of Arizona to cast my early vote about a week prior to the Election Day. A student volunteer standing there with some papers informed me that I had to wait more than two hours before I could actually get into the room at the end of the hallway to vote. I decided to stay anyway.

But immediately I tried to decide what to do while waiting. I had a campus newspaper in my hand, which I had picked up from a table as I arrived in the Union area. It did not take me much time to read some articles and skim others. “I wish I had brought a book,” I thought bitterly to myself. I tried to start a conversation with the boy in front me, but before we could find a common interest, his cell phone rang and he became immersed in another conversation.

I looked at the faces of students near me and I thought they might be thinking about similar things. I saw hope in many of their eyes. I felt unity not only in action just for bearing a long wait together, but also in our clear desire to initiate change. I felt even more proud of my academic community, and I took comfort in the fact that I had contributed to the process that culminated in this day and in this action the students and I were taking by canvassing voters in a nearby city.

I thought about the past. I asked myself, “when was the last time I stood in such a long line?” I must have stood in long lines at Disneyland but I do not recall. The wait to enter the Eiffel Tower was a mere thirty minutes. The line for the Phantom of the Opera was short the day I saw it in New York City. Oh, I remember. It took me more than two hours waiting in a line to get my first student visa to come to the United States in the late 1970s for my first trip to America. It was an early crisp winter morning in Tehran and it was a dramatic decision for me to leave my beloved birthplace. What did I think about then? Oh yes, I thought about the future. I thought about the struggle ahead of me. I thought about the hard work. And I remembered I was full of hope as well.

I did not get a chance to think about all the turmoil since then and all the journeys I have taken thereafter because I reached the voting room and then soon after made it to the voting booth. I cast my vote and came out with a sticker, which read, “I voted.” Now as a US citizen, I felt I was contributing to history, and I felt good. Indeed, the sticker felt as good as the visa stamp in my passport did nearly thirty years earlier. They both signified the same ideas about hope and opportunity. I went home and emailed my son, ‘go out, cast your vote, grab your sticker, and do not take it for granted.’

Kamran Talattof is an Iranian American Professor of Persian Literature and Iranian Culture at the University of Arizona, Tucson.