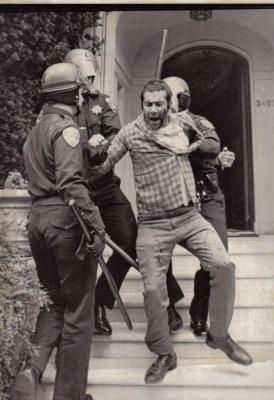 The Police in San Francisco Arrest a Student during an Anti Shah Demonstration in Front of the Iranian Consulate, during Princess Ashraf’s Visit to the City. A spokesman for the Demonstrators said that they protested against Princess Ashraf Pahlavi’s ( the Shah’s twin Sister) presence at the ceremonies marking the 25th Anniversary of the United  Nations. 40 People were Reported to have been Arrested by Local Police. UPI TelePhoto (circa 6/26/1970)