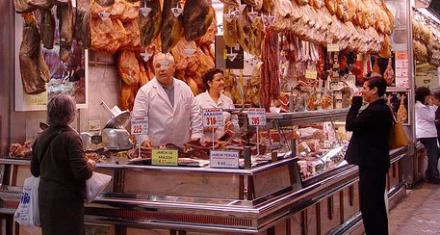 I ask for one of his blood pressure tablets and stick my head in a pillow.

“These pills are great dad, you should try them some time.”

“I prefer cigarettes,” he says. “Honestly, you’re an old man. You should be up celebrating the birth of Christmas.”

Mother is at my sister’s. They will be having turkey with the rest of the family while dad and I are going to eat lamb kebabs. There was no row but it does feel like we’re a splinter group dedicated to red meat.

Half an hour later I’m in the kitchen putting on a brew. Dad is grating onion.

“Do me a favour and pass the meat from the fridge,” he says.

All I find in there is a half-eaten slice of cheese and a cabbage.

“There is no meat in here.”

“How can that be?” says dad, touching the interior of the fridge as if the 4lb bag of minced shoulder – ground twice – we bought yesterday from a kosher butcher might actually be there but we can’t see it.

I check the glove compartment, under the seats and the bonnet but no meat.

“Baba jan, I don’t know how to break this to you but there is no meat in the car.”

“What about your car?”

“We went to the butcher’s in your car.”

Dad opens a bottle of red wine and pours me glass – I’ve forgotten all about my tea. It’s his way of making me feel better about the elephant in the living room – the fact that it was me who last had the meat.

We had never been to M Lipowicz, the kosher butcher’s, before. The two old men who run it were shocked when the two of us we went in – two unshaven, unkempt Arabs or Pakistanis. Dad ordered some meat. It took fifteen minutes to prepare so we went to the Indian restaurant next-door for a quick curry and returned two hours later.

“Discount?” said one of the old men, stroking his beard.

“Yes,” said dad. “You charge a little more for your meat being kosher, sir, no?”

“Well, I am Muslim – what use is kosher to me? You can discount the kosher!”

As this went on I was cowering behind a pyramid of Hebrew-lettered tins of pickled cucumbers where, reduced to infantile embarrassment by dad’s haggling, I left the meat.

“I have an idea,” says dad. He sticks a bag of walnuts, a gift from Iran, in the grinder in an effort to rustle up vegetable kebabs. An hour later the kitchen looks like a war zone, with flour everywhere and his test kebab in pieces. He looks distraught. I pat him on the back.

Dad calls M Lipowicz after fishing for their number online but no reply. He does a search for “Meat+Christmasday+west London+emergency” but nothing.

We watch Mary Poppins and fall asleep on the sofa. I wake up two hours later, greeted by a glass of freshly made tea. With the Queen’s speech an hour away we decide to swallow our pride and drive to my sister’s house. The whole family is surprised to see us and we are greeted like heroes.

“Did you bring your meat?” says my sister.

“No, we thought that would be silly,” I say.

We end up eating turkey and watching the Queen on TV with the volume turned down. Dad nudges me and says: “Perhaps the English know something when they eat a dumb vegetable like turkey on such a special day. Meat would only distract us from the wonderful time we are having with the family – and that’s what’s Christmas is all about.”