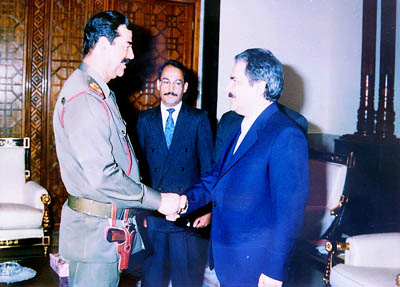 MKO leader Massoud Rajavi meets Saddam Hussein in Baghdad. The Iraqi dictator sheltered the MKO who sided with Saddam during the Iraq Iran War. (circa 1986)

The group was founded in the mid-1960s to oppose the Shah of Iran and western imperialism. It was instrumental in the November 1979 occupation of the U.S. embassy in Tehran, where 52 American hostages were held for more than a year. Ultimately, the group had an ideological split with Ayatollah Ruhollah Khomeini, who had become Iran’s supreme leader after the Shah was ousted, and its new cause became overthrowing Iran’s Islamic revolution. The group is accused of orchestrating a series of bombings inside Iran, including one attack that left the current supreme leader, Ayatollah Ali Khamenei, partially paralyzed. The group is also linked to the assassination of U.S. military personnel in Iran in the 1970s and helping Saddam quash Kurdish and Shiite uprisings.