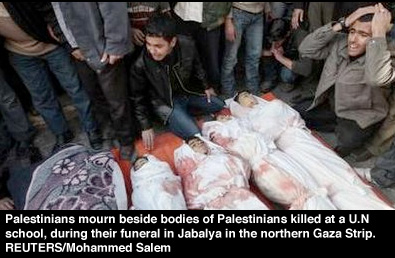 Is Israel’s assault on Gaza Hamas’s fault as the Israelis claim? After all, Hamas has not ceased firing rockets into Israel, knowing that this would trigger a ground assault.

The beginning of this war was remarkably similar to the July 2006 Israeli war on Lebanon, when you asked me a similar question. At that time, the Lebanese Hezbollah had captured two Israeli soldiers and killed several others and this was said by many to have been the cause of the war. I said then that tension had been rising between Hezbollah and Israel for some time and a flare-up had been inevitable.

What I would add now is that both the Lebanon and the Palestinian people have been at war with Israel since the partition of Palestine and creation of Israel in 1948. While the Fatah movement has recognised the state of Israel, other Palestinians, most notably Hamas, have refused to do so and continue to see themselves in a state of war with Israel. Israel, for its part, regards Hamas and Hezobllah as terrorist organisations and has been waging war against them. So it is misleading to look at any one stage of this long-running conflict as if it happened all of a sudden.

Looking at the recent past, Hamas began firing rockets into Israel after the end of a six-month truce which it believed had failed to benefit the Palestinians. On the contrary, during the truce, the Israeli blockade had prevented the people of Gaza from receiving food, fuel and medication.

The aim of the blockade – and the isolation of Hamas by the US and the EU following its electoral victory in January 2006 – was to show the Palestinians that Hamas was not serving their interests. That did not work and Hamas strengthened its position in Gaza, taking it over completely in June 2007 from supporters of the Palestinian Authority President, Mahmoud Abbas, who himself had not had much success in his negotiations with Israel. Given the deadlock, it was inevitable that there would be a confrontation between Israel and the Palestinians in Gaza, and this was made clear in statements by Israeli leaders shortly before their attack.

In an atmosphere of distrust, where each side is trying to predict and pre-empt the other side’s action, it is difficult to prove who was responsible for the breakout or escalation of violence. Any such effort is more likely to lead to a never-ending cycle of claims and counter-claims. What one could say is that the stronger party in a conflict can be expected to show restraint, even if it is attacked or provoked. If, instead, it takes disproportionate measures, it could be blamed for having made the conditions worse. Having said that, it is less important to establish guilt during a war than it is to stop the bloodshed.

Is this so called war in your view actually targeted at Hamas or the people of Gaza?

While a distinction could have been made between ‘civilian’ and ‘military’ targets in the past when wars were fought hand-to-hand, to believe that this could be done in modern, ‘industrialized’ warfare is either naïve, or dishonest. Soldiers cannot fight without civilian backup and any able-bodied civilian is potentially a soldier. Even in the old wars, victorious armies would often pillage, rape and kill the civilians in the lands they had captured.

In the case of the fighting in Gaza – which is very real and in no way a ‘so-called’ war –the density of population and the fact that the ‘soldiers’ are also ‘civilians’ at the same time make it impossible to distinguish Hamas fighters from ‘the people of Gaza’, even if the Israelis were determined to do so. In Israel, and many other countries, military establishments are located in the midst of civilian areas. These could become targets in a war. The only way to avoid ‘collateral damage’ is to avoid war altogether.

How significant is it that this action comes ahead of the Israeli elections and the inauguration of President Obama.

First of all, let’s note that the Israeli attack was launched just into the Christmas and New Year holiday period and as a result did not receive as much western media attention as it would otherwise have. The situation has changed now but in the meantime hundreds of people have been killed and many more wounded and much of the Palestinian people’s modest, civilian infrastructure has been destroyed.

Israeli officials have consistently said that the attack on Gaza is aimed at protecting the Israeli citizens against Hamas rockets. There is no reason to disbelieve this assertion. But Israel’s Kadima Party is engaged both in an electoral battle with its main rival, the Likud Party led by Benjamin Netanyahu, and a leadership competition of its own. An effort to protect the nation against an external enemy adds to one’s political capital in any election.

As far as Mr Obama is concerned, the Israeli leaders must have been heartened by his repeated declarations of support for Israel during his campaign and the appointment of several prominent pro-Israel figures in his administration, including the White House Chief of Staff, Rahm Emanuel, and Secretary of State Hillary Clinton. The Israeli leaders may also have decided to launch their attack and ‘finish the job’ before 20 January, to avoid diverting attention from Mr Obama’s inauguration.

If so, one could see a ceasefire soon, especially now that Israel has declared that it will halt its attacks on Gaza for three hours a day to “allow residents to resupply, get aid and so on.” This decision came after the killing on Tuesday of more than 130 Palestinians. Many of the victims had been sheltering in a UN-run school, a reminder of the killings in Lebanon, on two separate occasions, of civilians who had taken refuge in a UN building in Qana.

Israel argues that it has a right to defend itself. But while pointing to disproportionate number of Palestinians deaths Israel is causing, journalists are not asking Israeli commentators how many Palestinians it is acceptable to kill in order to achieve this objective. Is this institutionalised self-censorship or simply a collective oversight?

I don’t believe it is right for any journalist to ask ‘how many people it is acceptable to kill in order to achieve an objective’. To do so would amount to accepting the necessity of killing others, and only arguing about the numbers of killings that are ‘acceptable’. What journalists should do is to ask if killing has ever led to the true resolution of a conflict; whether the two sides to a conflict have exhausted all non-violent options; and what makes them think that violence is going to work. Unfortunately, these questions are not asked as seriously, consistently, and frequently as they should be.

Given the language of its political leaders, would you say it is far-fetched that Israel might consider industrialised genocide as a final solution to the Palestinian question?

Strong, and unacceptable, language has been used by some on both sides, much more so in the past. In recent times, as far as I know, the physical elimination of the other side has not been a ‘policy’ promoted by anyone in senior leadership position on either side. On the rare occasions when apocalyptic statements have been made, or have appeared to have been made, they have been followed by retractions, either openly or discreetly. I would personally take this as a sign that such a ‘solution’ is considered by most to be ‘far-fetched’.

Is what we are witnessing simple colonial land-grabbing based on the perception that the natives are racially inferior and their lives expendable?

The perception of racial, ethnic, or religious superiority could also serve as the basis of an effort to create separate ‘homelands’, as was the case in South Africa under apartheid. Israeli ‘land-grabbing’ and the consequent fragmentation of the Palestinian territories have been prominent in the West Bank and East Jerusalem. The network of Palestinian towns and villages which are separated from each other by the Israeli military have been described as ‘Bantustans’, a term that originated in apartheid South Africa.

As far as the Gaza Strip is concerned, it is very difficult to see any desire on the part of Israel to ‘grab’ land from which it withdrew only a few years ago, and which was more trouble for Israel than gain. If Israel had the option of separating itself from Gaza completely, it would have done so. While the Israelis have built a wall which has made it more difficult for Palestinians and their explosives to enter Israel from the West Bank, there is still no wall high enough to stop even the crude rockets used by the Palestinians in Gaza. These can either be stopped through peace, or an effort could be made to dismantle their ‘infrastructure’ through a military invasion.

What can we do? Is there any point in attending demos or giving to charities?

Again, as I said at the time of the 2006 war – and many others have said for decades – the conflicts in this region can only be resolved if the US accepts that its own interests require that it treats the Israelis and other nations as equals. Among other things, this would require Washington to recognise Palestinian – and other – leaders in the region, even if their stated policies do not match those of the US. It is only through such recognition that the US and the regional leaders can communicate and try to change each other’s views peacefully.

Demonstrations to prevent or end fighting, raising funds to help the people of Palestine, organizing events aimed at raising awareness in the West, especially in the US, about the just cause of the Palestinians, and communicating with political leaders can help persuade western governments to change their policies. The result many not be momentous in the short run but it would certainly be better to take such action than to sit at home, watch the carnage on TV and weep, or shout obscenities – in effect at the television set, or at other members of one’s own household.

P.S. I would like to take this opportunity to raise a simple, and obvious, point that to my knowledge has not received enough attention in the discussions on the conflict between Israel and the Palestinians. Israel has been around for 60 years, for 40 of which it has had internationally recognized Palestinian lands and people under occupation in one form or another. This has brought about such a close interconnection of the two peoples’ lives, especially their economies, that it is difficult to envisage the creation of two completely separate states.

Two closely linked states, or one state with two peoples as some have suggested, would mean the coexistence of two communities with one of the sharpest income disparities in the world. At present, the average Israeli citizen’s income is around 25 times higher than the average Palestinian’s. The gap is even bigger in the Gaza Strip (for figures, see the CIA’s World Factbook). Setting aside all historic, religious, ethnic, linguistic and other differences between the Israelis and the Palestinians, such a huge economic gap by itself will make it very difficult for any two communities to live side by side peacefully, as periodic riots in the deprived areas of big cities in the West have shown.

Anyone really in interested in ending the wars in this region should take urgent, major action to deal with the severe poverty into which the Palestinians have been driven by 60 years of war and occupation. Otherwise, any new ‘peace initiative’ will have a fate similar to all those that have been dreamed up since 1948.

For a selection of Palestinian and Israeli views on the Gaza fighting, see the latest issue of the Palestinian-Israeli online journal, .