“A Poem for Gaza” by Remi Kanazi 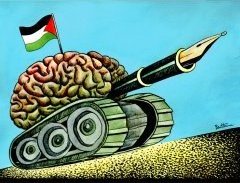 A Poem for Gaza

I never knew death until I saw the bombing of a refugee camp
Craters filled with disfigured ankles and splattered torsos
But no sign of a face, the only impression a fading scream
I never understood pain
Until a seven-year-old girl clutched my hand
Stared up at me with soft brown eyes, waiting for answers
But I didn’t have any
I had muted breath and dry pens in my back pocket
That couldn’t fill pages of understanding or resolution

In her other hand she held the key to her grandmother’s house
But I couldn’t unlock the cell that caged her older brothers
They said, we slingshot dreams so the other side will feel our father’s presence
A craftsman
Built homes in areas where no one was building
And when he fell, he was silent
A .50 caliber bullet tore through his neck shredding his

She thinks back words and memories of his last hug before he turned and fell
Now she pumps dirty water from wells, while settlements divide and conquer
And her father’s killer sits beachfront with European vernacular
She thinks back words, while they think backwards
Of obscene notions and indigenous confusion

*) Remi Kanazi is a Palestinian-American writer, poet, and editor living in New York City. He is editor of the recently released collection of poetry, spoken word, hip hop and art, Poets For Palestine.