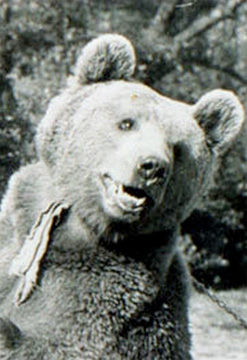 Richard Lucas has a dream. He would like to see a statue of Voytek, the Iranian Soldier–Bear of Monte Cassino, built in Iran. And the successful British entrepreneur, based in Krakow, is doing everything he can to make the dream become reality.

The story of Voytek the 6-foot, brown Iranian bear, who marched in rank, drank beer, wrestled with his fellow soldiers and distinguished himself during one of the bloodiest battles of World War II, is one of the most remarkable stories in military History.

Found orphaned in 1942 on the road between Hamadan and Kangavar, the baby bear was adopted by Polish soldiers and taken away with them to Lebanon the join the Allied 8th Army. He was later enrolled as an ordinary soldier and served in various places throughout the Middle East as part of the Polish Army’s 22nd Transport Division (artillery supply). But it was two years later, during the Battle of Monte Cassino, that Voytek finally entered the pages of History.

Through the smoke and confusion of battle, the bear repeatedly carried heavy crates of ammunition and food to soldiers stranded on the mountainside. The deafening noise of explosions and the incessant gunfire did not seem to worry him in the slightest. He brought cheer and hope to all those who saw him. Someone sketched him as he was carrying a large artillery shell in his arms, and this picture became the symbol of the 22nd transport division thereafter, emblazoned on the sleeves of all their uniforms.

After the war, he sailed away to exile in Scotland where he ended his days abandoned and alone behind the bars of an Edinburgh zoo.

Once famous all over the world as a symbol of innocence in times of war, this gentle giant has today become the focus of an ambitious international project that hopes to bring people from all over the world together to work in peace.

I talked to Richard Lucas recently about his plans for Voytek in Iran.

What’s the big idea behind the Voytek Project?
The Voytek story appeals to me, and almost everyone I tell it to. I believe it is a story that deserves to be told. It raises the human spirit. On top of this, I had this idea that the story could inspire people to do things that are very positive and worthwhile.

What do you have in mind?
I would like to organise a competition for paintings and drawings (and maybe new sculptures) for children and artists, so that his memory can be better promoted.

What would happen to the winning artwork?
I don’t know. Certainly uploaded onto an open source web site. Hopefully framed and displayed somewhere. Maybe sold for fund raising.

Who would be involved in judging the competition?
Local dignitaries (people qualified, and from the local town).The competition is not “that” important in terms of art and culture, but is more an awareness raising exercises. I would like the statues to be very attractive to children,

Where does Iran come into all this?
Voytek was born in Iran, which is isolated in many ways from the international community.

Do you think the authorities in Iran would be open to the idea?
I have no idea, I hope so.

How would you envisage the project working in Iran?
In the same way as in other countries. For example, if an Iranian school does some pictures, they can go “on tour” to other parts of the world. The competitions can become instrumental in finding people, activating them, and bringing them together. If people in Iran hear about the project (whether through family and friends or the media) and they like the idea for their own community, they can count on my support to try to help them make it happen.

A public monument to Voytek is already well under way in Scotland. Ideally, would you like to see a statue of him in Iran too?
Yes. Hamadan would be great. But I don’t want to the one deciding the best place. This choice should be made by locals. It might be in a park, a war veteran memorial, a zoo, a cemetery, or some other suitable place. I also don’t see any reason to limit the number of memorials. All entries to the competition would be submitted under a Creative Commons “freedom to copy” licence so that anyone who can make additional copies of the winning statue if they want to.

Iran, Poland, Palestine, Egypt, Italy and Scotland all have links to Voytek. Are these the countries you would ideally like to see get involved?
Yes. This is going to be driven by people reading articles like this. I want to encourage the formation of teams of volunteers, people who want it to happen (in any of these countries or elsewhere). They have to ask themselves the question, “What can I do to help”, and then get in touch with me. I met a Frenchman recently whose grandfather was at the battle of Monte Cassino (where Voytek fought). He was talking about doing something in Paris. Why not? Equally if no one connected to Italy volunteers, then nothing will happen there. But I am an optimist. I don’t think it’s beyond the resources of any well-organised adult to make this happen.

Getting children involved is especially important, isn’t it?
Yes. Voytek was a very human-like bear, and very appealing to children. Children everywhere love the story. They are really the key to its success.

You need to raise money, but the enterprise is really all about creativity, cooperation and enthusiasm. Am I right?
Exactly. This is definitely non-profit for me. I think that Voytek has “panda” like potential, and can bring people from different cultures together

Is this enterprise sponsored by any commercial or governmental organizations?
Not to my knowledge. As far as I know everyone doing anything is working for free. The Voytek Trust in Scotland is a charity, but this has only just been registered, so it came later than the idea. Aileen Orr, the leader of the Scottish initiative, has been spending her own money getting things going there.

In what ways can ordinary people get involved?
For sure. There are lots of ways. And you don’t need contacts or skills for this. Just a willingness to act. This is a project which gives ordinary people the opportunity to do something extraordinary (if they want to). They need to think what they can do, who they know, what resources they have. What are they ready to do? What do they want to happen in their local area? In almost any context, however, there will be a need to talk to local educational institutions, both schools and higher education that teach art and sculpture. They may need to be in contact with tourism and town promotion bodies, museums and cultural institutions, historical associations, animal lovers, zoos, politicians. I am a believer in decentralised teams. There may be other things that can be done that I haven’t thought of. This project has never been done before. It will be an adventure for everyone.

Who can we contact for help or advice?
I’ll be delighted to hear from anyone who wants to help. I will be glad to make suggestions of things people can do.

Do you think there’s a reason why Voytek’s story is beginning to resonate with people today, after having been neglected for decades?
I really have no idea. I have been asking myself the same question, and it doesn’t make sense. Maybe it’s to do with Youtube. Now if I tell someone about the story, I can e-mail them a link to film clips showing footage of Wotjek. It softens the heart. The internet also makes it easy to put together global teams at almost no cost. But probably it is simply an example of enterprise and initiative. A great idea with effective implementation can have a huge impact.

Thank you very much.

Richard Lucas can be contacted at richard.lucas@richardlucas.com