Shocking footage re the children of Gaza 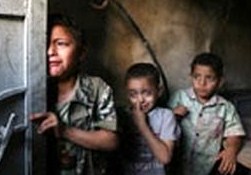 I’m not a particularly politically minded person. Some might call me a little ‘ignorant’ in world politics. I hold my hands up. I don’t care what the background history is when I see images like these to me, it’s irrelevant, I put it all to one side. I just want something to be done to stop the murder and injury of innocent children and civilians.

I tend to react to what I see. And for the sake of kids on this site, these are some of the less graphic things I have seen:

There are many more such video’s, some are horrific, on many different sites. The slaughter in Gaza is inhumane and it has no regard for Human rights. No matter what, children should be protected and at least, provided with medical assistance.  As you can see in the second video, the Red Cross were prevented by Israeli troops from providing medical relief and in some instances (the first video) children were direct targets.

All the protests and petitions all over the world have been little practical help to these kids. The governments’ world wide have sat back and watched and debated from afar.

I don’t understand how this and other atrocities can be allowed to happen. Silence and inaction is complicity.

And before anyone questions me and in light of the accusations made against Cameron lately, I have been active in terms of support of the injustices in Iran, including questioning Mr Galloway and other British MP’s re the executions of children and stoning in Iran. They had nothing to say. Surprise surprise.