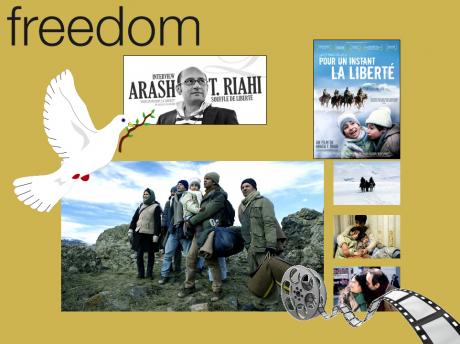 Pour Un Instant de Liberté directed by Arash T. Riahi tells the touching story of a group of Iranian refugees fleeing persecution in Iran who with the help of Kurds escape first to Turkey then to Austria.  The Independent film has got some very good reviews in the French Press and in film Magazines such as the prestigious Cine Live and Studio ( the two have merged recently into one magazine). It deals with themes of clandestine life, immigration, hope for a better life and the eternal quest for Freedom, without ever indulging in self pity observations that would be an easy temptation in films dealing with social and community issues.

The film has already won a few awards: Le Golden Eye in Zurich, The Chiestera Gold at Saint-Jean de Luz, the Student and Audience Priwe at the festival européen de l’Essonne, and the Vienna film prize! …

“The story centers around two little children and two men, a relative and a friend. Their goal is to bring the children to Austria, where the parents already are.

Along the way other refugees enter the story. After they reach the border their problems just begin. Now they are unprotected and have to fear the Turkish Police and the Iranian Secret Service. They have to get recognized as a political refugee from the UN as the only way to get to Europe officially. Everyday they stand in line to get this paper, while living in sleazy hotels, waiting, hoping. Desperation creeps into every corner.

But a different fate awaits them …”

More About the Film Here