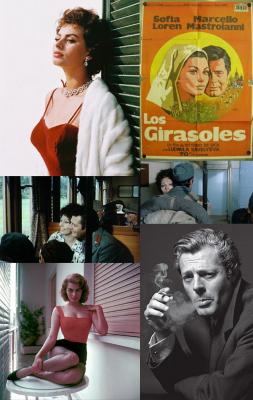 I, Girasoli (1970) aka Sunflower. Vittorio De Sica‘s Melo Drama starring Sophia Loren & Marcello Mastroianni dubbed in Excellent Persian tells a WWII story of an Italian woman’s desperate search for her husband. It should be noted that Mastroianni’s dubbed voice is truly very similar to his original italian voice. Truly a Fine work of Iranian film dubbers before in Pre Revolution Iranian Film and TV industry. A Paradoxal Irony, but also a happy coincidence Mastroianni’s Daughter Chiara to French Star Catherine Deneuve was the voice of Marjane Satrapi’s character in the Critically acclaimed animated film .

“An Italian soldier does not return from WWII and his wife eventually goes to Russia to find him many years after the war ended, only to dramatically find him in a living situation in a russian family. He too will travel to Italy, but to find her in a living situation, and he too will return alone. The title of the movie (“The Sunflowers”) point to the main crop the fields of Russia that italian soldiers tried to retreat from in months of walking and walking. It’s amazing that this reel is not available on video, maybe because it is slightly politicized in social portrayal (in the trip to Italy, the ex-soldier finds prostitutes, a clear sign of degradation of society of the West in the view of soviet propaganda).”