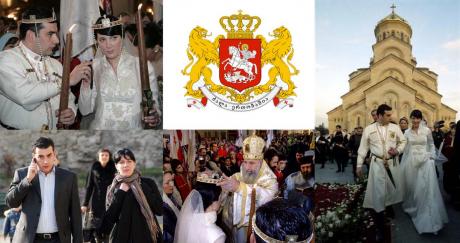 In 2007 The Georgian Parliament debated on the possibility of restoring the monarchy in the country. A recent poll indicated that 40 % of Georgians were supportive of the restoration of a Constitutional Monarchy on the advent of the Royal marriage of Prince David Bagrationi-Mukhraneli and Anna Mukhraneli.

More on Monarchism in Georgia here

The idea was already floated by the Head of the Georgian Orthodox Church was warmly greeted by opposition parties. On 8th February, the Remembrance Day for the great Tsar David the Builder from the House of Bagrationi, who unified Georgia in the 12th century, members of two royal dynasties will be getting married – Prince David Bagrationi-Mukhraneli and Anna Mukhraneli. Where exactly the ceremony will take place – in Tbilisi or in the ancient capital Mtskheta – has not yet been decided.

32-year old David Bagrationi-Mukhraneli, as the Orthodox news agency Russian line reports, became the head of the Royal House of Georgia last year after his father Prince Georgi Iraklievich Bagrationi-Mukhraneli passed away (1944-2008). David’s two younger brothers and sister live in Spain. He came to Georgia together with his father in 2003 and soon obtained local citizenship.

Tsarevich David’s fiancée, Princess Anna Bagrationi-Gruzinskaya, who is the same age as him, is the eldest daughter of Prince Nugzar Petrovich Bagrationi-Gruzinsky, the head of the Kakhetian branch of the Bagrationi dynasty and a direct descendant on the male line of the last Georgian Tsar Georgi XII (who reigned from 1798 to 1800).

As the leader of the “Traditionalists” opposition party Akaki Asatiani told us, the ceremony should be conducted by the Catholicos-Patriarch of All Georgia Ilia II. It will take place either in the Sameba Cathedral in Tbilisi or in the Patriarch’s Svetitskhoveli Cathedral, the seat of the Georgian Orthodox Church, in the ancient capital of Georgia, Mtskheta.

“This marriage should unite two branches of one of the most ancient Christian royal dynasties in the world,” notes the Georgian Patriarchy.

Many people in the country think that in the near future a revival of the constitutional monarchy is possible. The aforementioned Akaki Asatiani stresses: “David and Anna represent two dynastical branches which can both aspire to the throne in equal measure. This reunification removes the question of the legacy of the throne. I personally support the restoration of a constitutional monarchy in Georgia. After all, it is well-known that monarchies are the most stable countries. In Georgia many people suffer from a wild-eyed ambition to be president. I would hope that the restoration of the monarchy would remove this issue.”

David himself refrained from making any comment about the future structure of the country. “I have no intention of being involved in politics,” he said during a telephone conversation with a Georgia Times correspondent. “We are getting married for love and our marriage is not intended to suit state interests.” And, looking at it objectively, this is in any case a distant prospect. As Akaki Asatiani noted, a future child of the royal Bagrationi couple could become the Tsar of All Georgia. So both the young married couple and supporters of the monarchy will be looking forward to the appearance of a successor.

Incidentally, the idea of a restoration of the constitutional monarchy in Georgia is very popular. Back in 2007 Catholicos-Patriarch Ilia II suggested that his nation should contemplate this.

He said that in Georgia the conditions had arisen where the people’s dream of restoring the constitutional monarchy could be realized. The head of the Georgian Orthodox Church proposed a state structure where “the Tsar reigns, but does not rule”. In the Catholicos’ opinion, a constitutional monarchy would allow the country to emerge from its political crisis.

Many opposition parties have supported this idea. The former Georgian presidential candidate and now late oligarch Badri Patarkatsishvili expressed his approval. He supposed back then that the country’s territorial integrity would be restored thanks to monarchical government.

And another former presidential candidate, leader of the new “New Right” party David Gamkrelidze defined his view in the following way, which has not changed to this day: “I think that a constitutional monarchy is a very interesting system of government, for many reasons. One of its interesting aspects is that we would be able to start talking from a clean slate. There is a single Bagrationi dynasty uniting both Georgians, Ossetians and Abkhazians. Of course, this does not give grounds to succumb to the illusion that as soon as Georgia were to become a constitutional monarchy, all the problems connected with Abkhazia and South Ossetia would immediately be solved. But this would give another chance to start a normal dialogue.”

The son of the first Georgian president Konstantin Gamsakhurdia, who is now head of the opposition party “Freedom”, also supports this idea.

But Saakashvili just made a joke about it: “My great-grandmother was a Bagrationi. May everyone who wants to restore the monarchy in Georgia take heed. It really would be good if in the future we did away with elections and took up a peaceful form of government, based on family traditions.”

To be serious though, Mikheil Saakashvili, as we know, has meanwhile expressed his intention to share his powers, which are without exaggeration immensely extensive, with Georgian parliamentarians. There are plans to examine respective amendments to the Constitution as early as this year.

How will events in Georgia ensue? It cannot be ruled out that the opposition forces will be the decisive factor.