Smell of Fresh Gee Oh Pee is in the Air! 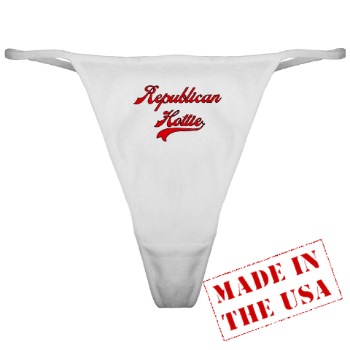 I am so excited for the GOP comeback. I am dreaming of which beautiful name I will be able to click on when I hobble into the voting booth on November 1, 2012. Hopefully, PRESIDENT: SARAH SEXY PALIN (Republican).

The idiot democrats are celebrating ’08 (which any squirrel could have won, obviously) while the GOP is plotting some serious schemes. Obama and his morons better look out because this shyte is tight like a 14 year old gymnast.

I’ve been learning about that handsome, tall, and dark GOP leader Michael Steele pledging to bring HIP-HOP culture into the party, I was like “Why didn’t George Bush or Karl Rove think of this?” Of course, that is what the GOP will be fixed by – HIP-HOP! Blacks! Rap! Deep Bass and lyrical rhymes.

Mr. Steele also said he would target one armed midgets with this sexy new campaign.  I’m excited as hell. I think loud, angry, percussive music and baggy clothing are definitely what will fix the GOP.

Also, it reminds me of something the stud Rush Limbaugh (juicy boobs big enough to make Salma Hayek jealous – or fit a persian kitten between MEOW) said recently about the lack of republican presence in PopULaR CuLTuRE! He thinks that it can just happen by putting an elephant on Miley Cyrus’ ass! HAHA! I can’t wait to see these tricks. Maybe we will have a WWE wrestler GOP rooting? Hmmmm. Karl Rove would be so funny for this job! Or Alberto Gonzales? He can waterboard the other wrestlers as his finishing move!!!!

Freedom Concerts were invented by Sean Hannity and they definitely helped the GOP succeed in 2006, 2008 and overall world Domination.

I also appreciate Mr. Rick Santorum telling us that the Koran was written in Islamic. This is very groundbreaking. I think Obama’s days are numbered (5 billion years in office at least).

I think what is also interesting about this “pop culture” or even arts in general is that they are coming out of opposition or anti-establishment. The only “mainstream” or “pop culture” reference the GOP has is the monopoly man and he is very popular of course. Good luck GOP! I’m rooting for you.

I think Michael Steele is an idiot for not citing where he got this idea! Karl Rove is a Hip-Hop natural as you can see. MC ROVE does his dance. Black people will FLOCK to this, and maybe Iranians too if they blend it with some lovely Iranian Pop Music or Bollywood ballads. I can’t wait!