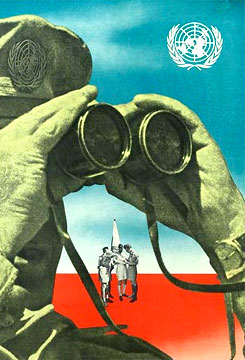 World Public opinions regarding the United Nations and all of its component parts vary from absolute ignorance of its history, structure and purpose to an outright dismissal of the entire organization as a dysfunctional international agency. Sandwiched between the two are the opinions of those who lament the “real” United Nations and its departure from what it could be, and then there are those who are operating within the context of realpolitik—the realist theory of international relations– and see it as viable mechanism for conflict resolution provided that the governance and the decisions are left to the most powerful nations. The reality, however, is that since its inception the United Nations (including all of its affiliated agencies and programs) has tried to present itself as truly supranational, united and a legitimate international body attempting to serve the interests of humanity at large. Yet throughout its history when it began as the “League of Nations” it has acted as anything but a legitimate international organization. Big powers have repeatedly used the UN as the alleged voice of the so-called “the international community” when formulating and implementing hegemonic global policies (including war and invasion) just to serve the interests of their own dominant classes. In recent years, various events around the World have shed light on the most powerful components of the United Nations –the Security Council, and the two affiliated agencies –International Monetary Fund (IMF) and the World Bank. United Nations’ Security Council which has remained totalitarian since its inception and its undemocratic veto system has served the interests of hegemonic powers, thereby fomenting serious global crises. This paper examines the link between global hegemonic policies and the United Nations Security Council, the IMF and the World Bank.

The Background
Immediately following the first inter-imperialist war- World War I, Europe and North America decided that future wars, particularly those fought on a global scale could be averted by creating an international organization with all of the nation-states as signatories. To that end the “League of Nations” was created (1). The League of Nations was a supranational organization resulting from the Treaty of Versailles in 1919–1920. U.S. President Woodrow Wilson was one of the principle architects of the league. While he was supported by most of the league members, he was opposed by the United States Congress which was vehemently against it on the ground that it could undermine state sovereignty.

The advent of the Second World War suggested that the League had failed in its primary purpose, which was to avoid any future world wars. The United Nations was created after the end of the war as a replacement for the league and equipped with a number of now powerful and influential agencies and organizations. The term “United Nations” was coined by the U.S. President Franklin D. Roosevelt whose pragmatism and optimism encouraged him to see a World order resulting from the bloody conflict as one based on cooperation rather than permanent conflict. His successor, President Truman (2), however saw the World as a battleground of good and evil (capitalist and communist). To Truman, the Soviet Union was not to be trusted and if at all possible had to be isolated. Truman believed the ideology espoused by the Soviet Union was inherently “anti-democratic”, anti-capitalist, anti-freedom and anti-free enterprise. The Cold War was descriptive of that mind set and the context in which the United States’ economic, political and military decisions were made and implemented. Within a short period of time, the Communist bloc led by the Soviet Union became a challenging and formidable military power, and was perceived as a direct threat to Western democracies in general and the “national security” of the United States in particular. The divided world between the two antagonistic and competing camps of “Left” and “Right,” drew the Third World as the center of proxy wars and competition for resources between the United States and the Soviet Union. In this context all of the nationalists and progressive movements in the Third world were labeled “communist” and therefore had to be contained or eliminated. Homegrown communist influences in Europe, Greece and Turkey (among other places) were viewed by the administration as an indication of Soviet expansionism. Both the United States and the Soviet Union had veto power on the UN Security Council and from the point of view of the Truman Administration, the Soviet veto power had to be circumvented so as to prevent communist expansion. As one of the mechanisms of preventing “communist expansion” as embedded in Truman’s Four Point policy for containing communism, the U.S. began formulating policies toward implementing regional treaties. But the problem was that the United Nations’ charter did not allow such treaties and it had to be restructured. Regional treaties would have allowed the United States to override the Soviet veto power while simultaneously pursuing collective (regional) security outside of the United Nations.

At the San Francisco Conference, the United States successfully altered the UN Charter (Article 51) so as to facilitate the formation of legally binding regional treaties. The Rio Treaty was the first successful product. From the point of view of the American policy makers, the new threat had to be dealt with by regional military and economic (security) systems and organizations which could unify all members in a region against a common enemy—the international communism. Through the various security systems, the U.S. was able to utilize the resources of regional governments without appearing to be interventionists. In the post war period as in the pre war era, the U. S. was seeking an integrated world political and economic system which could prevent the growth of anti-capitalist groups everywhere. To that end it sponsored the creation of multilateral economic agencies such as the IMF and the World Bank. The State Department articulated its views on the new world system by warning that socialist victories would destroy the institutions of Free enterprise and free trade and would deny the United States access to the supply of strategic resources. (Foreign Relations, Department of State Bulletin, February 16, 1947:291). Regional security systems were essential because according to Dulles (1950:88), the United Nations Security Council was “hobbled by the veto” (3). And as long as the Soviet Union possessed this power, it could prevent the formation of regional treaties, veto necessary actions to protect vital United States interests and increase its sphere of influence. Therefore, the strategy called for an overhaul of the United Nations Charter (Dulles, 1950:88). Formal acceptance of Article 51 made the formation of a “collective self defense” a possibility. To Dulles and Vandenberg, this provision was the” most effective method of “containing the Soviet aggression”. Alteration of the United Nations Charter enabled the United States to proceed with regional treaties, and it was according to Dulles (Dulles, 1950:93) “a blessing” for mankind, and to Vandenberg “a sunlight in a dark world.” And Dulles (1950) as one of the architects of the Cold War argued and agreed that the United Nations was a “universal” and a “World” organization designed to maintain peace, but he disagreed that it should be the only organization in charge of world peace. The Truman Administration and indeed all of the U.S. Administration, since, have used regional treaties in implementing foreign policy. Regional treaties have allowed the powerful members to rule with the veto power when and where necessary and use military alliances and force when and where their interest warrants. Since the creation of the Security Council the permanent members have used their veto power in support of their own economic, political and military interest or those of their allies. China has used its veto 6 times; France 18 times; Russia/USSR 123 times; the United Kingdom 32 times; and the United States 82 times. The majority of Russian/Soviet vetoes were in the first ten years of the Council’s existence. Since 1984, China has vetoed three resolutions; France three; Russia four; Britain ten; and the United States 43.

The concern regarding the oligarchic nature of the Security Council has raised the possibility of giving it an appearance of democracy. Currently, in addition to the permanent members, there are ten rotating seats which serve primarily as non-essential members. Japan, Germany and Brazil have been contenders for a permanent seat on the Security Council. The concern regarding the absence of a representative from the Moslem World and Latin America, India and Africa has been registered and in 2004 former UN Chief Kofi Anan proposed the expansion of the Security Council to 24 members. These suggestions have remained merely at the level of suggestion. Any change in the structure of the Council requires alteration of the UN charter and the benevolent cooperation from the reluctant permanent members and that will remain unlikely. Security Council Resolution #1674 of April 28, 2006, explicitly states that the aim ought to “protect populations from genocide, war crimes, ethnic cleansing and crimes against humanity.” Lo and behold that these very abhorrent and savage mistreatment of the weak and the defenseless have been traced to big powers or their proxies in the post-colonial world.

To understand the extent of the charges against those committing war crimes it is necessary to have an unadulterated definition of “war crime” and apply it when and where it takes place irrespective of the status of the perpetrator. History of this issue shows that when any of the powerful countries or individuals belonging to these countries are charged with war crime, the wheels of “justice” turn very slowly if at all. And the resolutions against them are often treated as formalities. However the reaction to charges against those belonging to the so-called “rogue” states is much stronger. Frequent disregard for the rules and regulations even for those internal to these organizations, has created crises of credibility and legitimacy. This is also true of the discriminatory application of sanctions as suggested by the Security Council resolutions. Sanctions against a particular country or set of countries adversely influence global economic transactions, in terms of human suffering caused by shortages, high prices and lack of access to basic necessities, and overall have been counterproductive. Even Security Council Resolutions that are made under Chapter VII (threats to peace and acts of aggression) which are legally binding, contain no specific mechanism for punishment or prevention. The consideration of Chapter VII has been very selective such as the cases of Korea, Kuwait, and variety of Sanctions imposed under the regime of capital elsewhere.