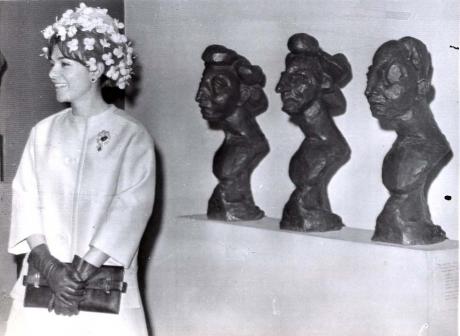 Empress Farah of Iran stands in front of 3 Busts of “Jeannette” by Henri Matisse during her Visit of The Guggenheim Museum in New York, NY. (circa 1962)

“New York: Empress Farah of Iran, standing beside several bronze heads of “Jeanette” by Henri Matisse, views some of the Art Works at Guggenheim Museum on 15th April 1962. The 21 year Old wife of the Shah of Iran was given a privately conducted tour of the Frank Lloyd Wright – designed museum before it opened to Public. The Empress and the Shah will be accorded New York’s traditional ticker tape parade tomorrow on the 16th of April.” UPI Telephoto