An Amaaazing Archive on Iran with Photos 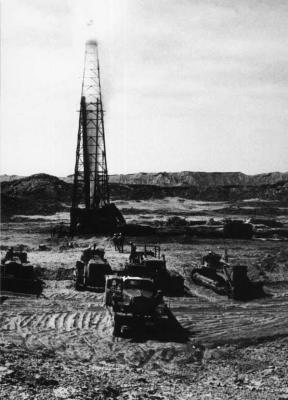 This is a photo of the first Iranian oil well, opened on May 26, 1908 in Masjede Suleyman. It is from an amazing historical archive, The Iranian History Chronicle, which is on the website of Fouman International Marketing (fouman.com)  The URL for the index of the chronicle is http://fouman.com/history/index.htm.

The archive covers four thousand years of history with commentary, links, and photo documentation. For me the most interesting ones are from the first half of the twentieth century because those old-fashioned photos are always so beautiful.

So….there I was, minding my own business, happily googling for an image of a good ol’ IRI hanging to go with a rant on IRI apologism I thought was long overdue. And among all the lovely modern photos, I found one of this poor guy. He is Sheikh Fazlollah Nouri who has the privilege of having presented Mohammadali Shah Qajar with a petition to end the monarchy.and also of being the first Ayatollah to be hanged in modern Iran.

So I was intrigued and went to the source. Here are a few other items that caught my eye, among the hundreds listed in the archive (like I said, four thousand years..). I’m posting the photos only, but again, they come with commentary and links.

The arrival of Morgan Shuster to Tehran in 1911. I like him. He is widely considered to have been the last American true friend of Iran in politics. Hired by the Majlis of the Constitutional Revolution to help fix the finances, he actually did. He did other good things too, like advising Roosevelt to side with the Iranian popular revolt against British oil interests, until he was “dismissed” by the British and the Russians, whereupon he wrote a book called The Strangling of Persia..

I never knew Reza Shah made the cover of Time Magazine. But he did. In 1938. When the Trans-Iranian Railway was inaugurated and he “took a ride in his gold, silver and rosewood private car.” I don’t suppose he went in quite such style when he was exiled to Mauritius.

The murder of Ahmad Kasravi, the historian who wrote about the Constitutional Revolution and viciously and consistently critiqued the Shia clerical establishment for which he was..well.. murdered. Brutally. This is a composite photo and one of the images is of his savaged corpse, so if you’re looking for palm trees, don’t click.

I do have to say that the 20th century part of the archive focuses mainly on the most serious, and sometimes darkest, aspects of Iranian history, but here is something cheerful: Royana, the cloned sheep.

Unfortunately, the archive ends in 2007. I don’t know why because Fouman International Marketing seems to be doing quite well, marketing everything from Persian rugs to computer software to surveillance cameras.

Fouman, may you live long and prosper.