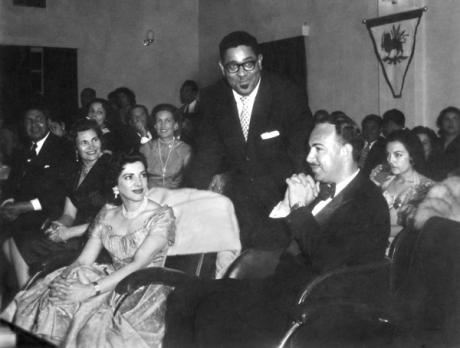 Dizzy Gillespie (he bacame a Baha’i in 1968) at a reception with Princess Shams Pahlavi, elder sister of the Shah of Iran, and her husband Mehrdad Pahlbod ( Later Miister of Culture and the Arts) at Abadan, Iran, 1956. Gillsepie was to convert to the Baha’i Faith whose Prophet was from Persia.

Gillespie and his band stopped in Iran during the inaugural State Department jazz tour aimed at Warming US Relations with its Allies. In the first stop of the inaugural State Department jazz tour, the band played in this Persian Gulf oil town, meeting national leaders and taking in the sights. The price of this extensive voyage, which also included visits to the Middle East and Southern Europe, led to criticism by some U.S. lawmakers, but the value of this innovative approach to diplomacy was defended by many.