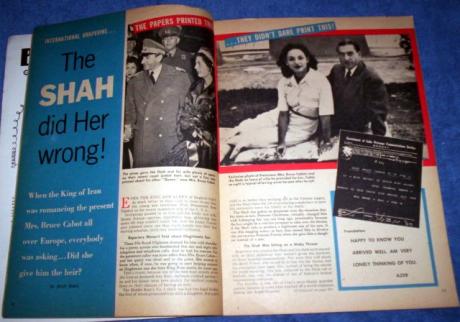 SHAH of Iran featured in the  Infamous Hollywood Tabloid JULY 1955 CONFIDENTIAL Magazine. Article entitled “THE SHAH DID HER WRONG!”. WHEN THE KING OF IRAN WAS ROMANCING THE PRESENT MRS. BRUCE CABOT ALL OVER EUROPE, EVERYBODY WAS ASKING… DID SHE GIVE HIM THE HEIR?

Second Page: THEY DID NOT DARE PRINT THIS: “Happy to know you arrived well, Am Very Loney Thinking of you” signed AZER ( aka “Reza” spelled the otherway round)

Explanation: At the time of this publication however the Shah was already married to Soraya Esfandiary. The photo of the Shah with the young woman seems familiar to one taken of him with his former Wife Fawzia. So it is unclear if the Photo is authentic or may have been retouched to suggest this liaison.

As for Bruce Cabot was a Hollywood Heavy Weight who often played tough guys. He is best remembered as the male co star of Fay Wray in the classic 1933 Horror Fantasy Adventure King Kong.