If Picasso could cook 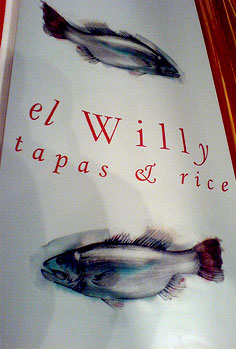 Taxi drivers seem reluctant to make the 15 minute journey from the Nanjing business district to the infamous French Concession area of Shanghai where our destination ‘El Willy’ is discreetly tucked away. On arrival, we walk towards the faint glare of candle lit lanterns which become brighter and more visible as we approach. And then, all of a sudden, a very different Shanghai exposes itself to us. One that immediately makes you forget which corner of the earth you are in… Goodbye Shanghai, hello Europe!

We arrive at the restaurant owned by Chef Patron Guillermo Tullera Moreno (hailing from Barcelona, Spain), affectionately known as “Willy”, after which he named his first restaurant. Welcomed on arrival by our hostess, I push past her to let my eyes scour the restaurant for the little-known legend that is Willy. The hostess invites us to have a drink at the gorgeous little wine cave adjacent to the restaurant called “Torres Vinoteca”, which is a very famous Spanish winery that has clearly partnered with Willy and opened this perfectly bijoux Cave within the restaurant. How did this juicy little slice of Catalonia, come to find itself in Shanghai? My quest deepens!

To be perfectly honest, I did not find ‘El Willy’ through any level of extensive knowledge of Eastern Culinary hotspots, but instead read about it on a recent flight from Hong Kong to Beijing, and I’m very thankful that I did. What intrigued me was the possibility that a food culture that is so alien to the Chinese, something as abstract as Catalonian/Spanish fusion food, could prove so popular in a culture where most people only ate Chinese food. To highlight this point, I can tell you that not a single member of staff at out 5 star hotel, 99% of whom were Chinese, had heard of this restaurant I had chosen, not even our Concierge! The only person that instilled some degree of faith in me was my Russian beauty therapist Anna, who told me ‘El Willy’ is the most fantastic place to visit and eat at. Not to be overlooked, Shanghai boasts an impressive population of 23 million people and only 3 million of these are foreigners, so it’s no wonder they’re not so big on imported foods, except fast food of course.

Wasting no time getting acquainted with the menu, I pour through each section like an excited kid in a candy store… Showing off my thick (and unnecessary) Spanish accent, I proceed to order far too many dishes for the mere 3 people that we are. Dishes like “Mejilliones con ajo” – Garlic mussels to you and I… Lobster Paella, Shrimp and Mushroom Cannelloni with a coconut and black truffle cream sauce, 5-hour slow-braised beef cheeks with passion fruit and banana, Scallop Ceviche with a spicy guacamole and delicate little edible flowers, whose presence and vibrance illuminate the delicate pale flesh of the raw sliced scallop. Daring combinations that wreak of fusion of the highest order and let me tell you, I am not the type of person who ordinarily goes for this type of food, as it can often be more about the shock factor then actual flavour and substance of a dish. Rarely does such complex fusion succeed to produce the kind of food that one could actually say “Yeah, I could eat this regularly” and instead disappoints and often conjures up some bizarre and unpalatable mutant breed of dish that is destined to be forgotten. However ‘El Willy’ doesn’t disappoint one iota.

One could say that Willy has taken the crux of Catalonian cuisine and charm and combined it with some of the world’s finest produce, such as truffles and more exotic passion fruit and Sichuan pepper, to create a thing of beauty… Although I’m not a professional critic, I am definitely a harsh critic and possibly a professional appreciator of all things ‘Culinaire’, so to speak. Food is my life and I have the figure to prove it!

Dessert was a tongue tingling ‘Chocolate obsession’ – a trio of rich chocolate ice cream, a chocolate fondant & a chocolate ‘finger’ mousse with a fiery mango and Sichuan pepper coulis, which made my lips and tongue quiver with a burning sensation.

The best part of the evening for me, incredibly, was actually meeting the infamous Willy himself. Summoned from his kitchen, he approaches with a warm and friendly smile that invites conversation. I explained to him that I write about food and that it’s my passion and began to recount my evening’s experience to him, detailing each flavour that exploded in my mouth. I was devastated that I wasn’t lucky enough to secure a portion of the Suckling Pig, however I was very happy with the beef cheeks and also the somewhat dubiously named “Little Sexy Sandwiches” – mini toasted rounds filled with Iberian ham, mushroom, cheese and black truffle. Ohhhh… they were very sexy indeed, it has to be said.

What struck me about Willy was how humble and happy he came across. He was sporting a Chef’s jacket splattered with a paint pattern that made him look more like Picasso than a Chef… And perhaps it’s an intentional nod to the fact that Chefs are indeed artists in many cases (although not all!) The only thing that sets his visual appearance apart from any other chef is the cutesy little Terracotta-colour knitted woolen hat that graces his head. Somewhat unorthodox, but perfectly unique… and Willy is a rare and unique sort of soul. We spoke briefly of his home town Barcelona and his time in London, where (as he put it) he was ‘kinda broke’ and couldn’t eat in as many top restaurants as he’d have liked… his honesty touched me and struck a very heart warming chord with me. He assured me that in those 2 short years since his London trip, things have turned around quite significantly for him and that he is very happy. He gave me his card and asked me to email him, I happily agreed and promised him that when he is next in London, I would do my best to show him the coolest ‘Cheffy’ hotspots in town.

I left with a warm feeling inside, partially because of the fantastic food but mostly because Willy’s genuine warmth is the kind of commodity that should be bottled. It is clear he incorporates that same warmth and enthusiasm into his food and perhaps not-so-coincidentally, his restaurant logo says “El Willy” with a drawing of a little pig and the words “Happy Food” underneath it… and all of a sudden it all falls into place. This man is a Chef of the very best kind, not only because he is a great Chef that cooks from the heart, but because he has the kind of warmth and personality that most Chefs these days seem to lack. So Viva El Willy, I say!!! And if you ever find yourself in Shanghai, make sure you track Willy down… but of course, book ahead of time, because every single person in the packed restaurant that Monday night, seemed to know Willy intimately. From affectionate hugs and kisses to the kind of laughter and humour that only comes when you’ve known someone for a while….!

Maybe now I too can say “I know Willy”… or perhaps it’s still too early just now… But I can tell you, he warmed my heart and definitely left a lasting impression with me. So until next time Willy, whether Shanghai, Barcelona or London… I shall dream of those beef cheeks for a while to come. Mucho Gusto Mi Amigo!