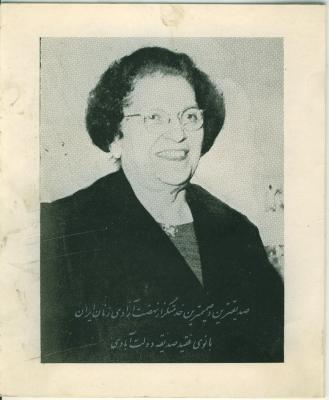 Sédighé Dolatabadi (Sadiqeh Dowlatabadi), daughter of Haj Mirza Hadi Dolatabadi was one of the vanguards of the women’s movement in Iran. She was born in 1882 in Isfahan. She began her education in Persian and Arabic under teachings of Sheikh Mohammad Rafi Attari in Tehran, and learned her intermediate classes from the then-teacher of the Daral-Fonoun (Polytechnic institute). At the age of 15 she married Dr. Etezadulhukama. In 1917 she returned to Isfahan, and opened the first school for girls in the city. One year later she established the Association of Isfahan Khawateen (Society of Isfahan Women). During these activities she opened a school for poor girls named Ummulmadares. All of these activities had a positive impact on the education and training of women.

In the year 1919 Sédighé Dolatabadi published the first women’s periodical in Isfahan called Zaban-e Zanan (The Women’s Voice) which was faced with opposition from Mulahs in Isfahan.

After ending the publication of Zaban-e Zanan in Isfahan, Sédighé Dolatabadi went to Tehran and once again started publishing it in the form of a monthly magazine. During this time, in 1921, she also established an association called Anjuman-e Azmayeshe Banuwan (Society Testing Women).

Sédighé Dolatabadi went to Europe to complete her education. She succeeded in receiving her B.A. from the Sorbonne University. In the spring of 1926 she represented the Iranian women in the International Alliance for Women’s Suffrage. She returned to Iran in 1927, and started her cultural activities without veil, while removal of veil was announced in the year 1935 in Iran. Sédighé Dolatabadi accepted her appointment to the post of Supervision of Women’s Education within the Ministry of Education, Pious and Light Industries in 1928. The next year she was appointed to the post of the General Directorate of Inspection of the womens’ schools. And in the year 1936 she was appointed in the Kanoon-e Banuwan (Women’s Association).

Sédighé Dolatabadi once again started the publication of Zaban-e Zanan in 1942, and published it once a month in the form of a magazine. In 1947 she participated in the Congress of Women’s International League for Peace and Freedom, where she delivered a speech about Iranian women.

Although information about the women’s movement in Iran can be traced before the constitutionalist period of 1905 – 1909, the declaration of constitutionalism provided mental and political changes for Iranian women. The women’s movement gained strength and expansion under the shadow of this movement. Under such circumstances a number of trained Iranian women began action towards the literacy of women, establishment and expansion of women’s schools, and establishment of women’s associations. They started publishing newspapers and magazines for women. And they struggled to achieve their voting and political rights, active participation in cultural and political fields, and equal rights as men had. In such a way the great women’s movement was founded.

Sédighé Dolatabadi was a vanguard of this movement. For alleviating illiteracy she established schools for girls. She started establishing women’s associations, which played an important role in participation, strength, and views of literate women at that time.

Publishing of the newspaper Zaban-e Zanan was one of the valuable activities of Sédighé Dolatabadi. The magazine Zaban-e Zan was the third specialized publication in Iran and the first publication abroad. Despite unfavourable conditions, Sédighé Dolatabadi was able to publish the publication for two years in Isfahan. The newspaper Zaban-e Zanan was the first experience in journalism for Iranian women. At the beginning this newspaper devoted its time more to affairs related to women. Gradually Sédighé Dolatabadi, who was one of the swift political activists for women’s equality, dragged it to cover daily affairs, which was prohibited in those days. Because of its political and social stance and most of all because of its criticism of the famous Wusuqqudawla agreement (1919) the newspaper was stopped from publishing. Subsequent to its cessation and due to opposition and provocations, the activities of Sédighé Dolatabadi were even more restricted, and she left the city.

Chosing the name of Zaban-e Zanan for the newspaper was an obvious contradictio to its purpose, and its meaning was to demonstrate this to established attitudes. In the prevailing ideas, Zaban-e Zan should be short. ‘Long tongue’ (or too much talking) had negative consequences for women. But by naming the newspaper Zabane Zan, Sédighé Dolatabadi not only ignored the prevailing (ghaleb) design but also gave it a positive meaning. The newspaper Zabane Zan was putting forward in its pages the modern theory issues like social democracy and socialism, which can be an indication for Sédighé Dolatabadi’s attempts for providing necessary theoretical columns for the women’s movement in achieving their individual and social rights.

In the title of the newspaper was written: ‘Only the writings of women and girls are accepted, and our office is free in reductions or additions…’. In this context the newspaper pages were the monopoly of women, because it was literally the tongue of women. The language of the newspaper is swift. However it avoids using obscene words, and obeys the respect of the words and the glory of the pen. The publication is in simple language and well understandable, and the newspaper tries to avoid using non-Persian words, reflecting them with equivalent Persian words.

Sédighé Dolatabadi, one of the vanguards of the women’s movement has done valuable work in regard to education and awareness of women, in publishing the newspaper, in the struggle towards equality of the right of women. In this respect she tolerated accusations and allegations.

The memories, notes, personal letters and official briefs to the government departments, articles by Sédighé Dolatabadi and the pages in the Zaban-e Zanan magazine are special and important documents in the new historical researches with regards to the works and the history of the women’s movement during the first half of the twentieth century.

The personal archive of Sédighé Dolatabadi has been given to the department of Middle East and Central Asia of the International Institute of Social History by her honorable family. They include: