From Persepolis to Babelsberg 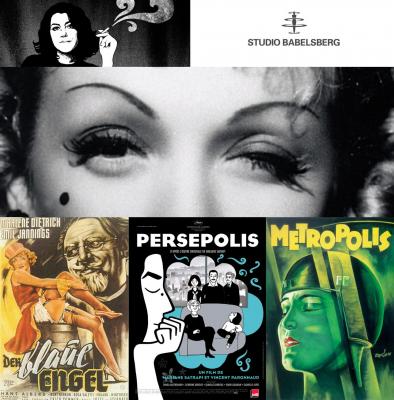 Satrapi’s upcoming film Chicken & Plums will be her first live action movie with real actors which she will direct with co director Vincent Parronnaud. The film is set to be Shot at the Legendary Babelsberg Studios in Berlin where such classics and the BLue Angel starring Marlene Dietrich and Fritz Lang’s Metropolis were shot in the 1930’s.

Chicken and Plums tells the story of Satrapi’s great-uncle Nasser Ali Khan, one of Iran’s most revered musicians, who takes to bed after realizing that he’ll never be able to find an instrument to replace his beloved, broken tar. Eight days later, he’s dead. These final eight days, which we’re taken through one by one, make up the bulk of this slim volume. While waiting for death, Nasser Ali is visited by family, memories and hallucinations. Because everything is being filtered through Satrapi’s formidable imagination, we are also treated to classical Persian poetry, bits of history, folk stories, as well as an occasional flash forward into lives Nasser Ali will never have a chance to see. Each episode is illustrated with Satrapi’s characteristic, almost childlike drawings, which take on the stark expressiveness of block prints. Clear and emotive, they bring surprising force and humor to this stunning tribute to a life whose worth can be measured in the questions it leaves.