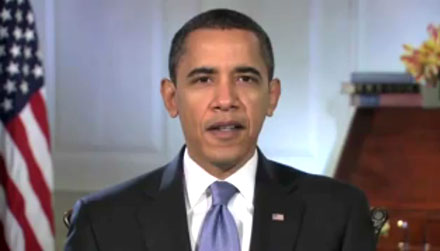 On Friday morning, President Barack Obama released a video to congratulate Iranians around the world on the occasion of the Persian New Year, or “Nowruz.” BBC Persian’s hugely popular and officially-banned satellite channel has broadcast the message in its entirety to Iran.

This video “postcard” to Iran reflects the new administration’s emphasis on renewing American soft power and public diplomacy to tackle the many foreign policy challenges facing the US and its allies. Politics aside, President Obama’s typically eloquent rhetoric is sure to impress the Iranian masses. And his demonstration of genuine appreciation for the artistic and literary contributions of Persians (he even quotes Saadi!) is a major improvement over George W. Bush’s often culturally tone deaf approach to Iran.

Tucked into this warm overture however, was a statement that should alarm all those concerned about the security of Israel, the long-term stability of the Middle East, and the Iranian people’s three decade-long struggle for freedom from theocratic misrule. “The United States wants the Islamic Republic of Iran to take its rightful place in the community of nations,” Obama declares. “You have that right.”

Coming from a US President, this is an absolutely stunning choice of words. For it seems to suggest that going forward, the United States takes for granted – for all intents and purposes – Iran’s clerical regime as a legitimate entity and a permanent fixture of the Middle East. In other words, the Obama Administration’s approach vis-à-vis Tehran is based on the assumption that the IRI’s recent ascent is simply an irreversible process, i.e. now it’s just a matter of learning to “deal” with the mullahs and encouraging them to become more responsible.

But this is clearly a false assumption. The IRI is currently facing a number of problems that threaten its domestic stability and undercut its ability to realize its dreams of regional primacy. These include falling oil prices, massive inflation, high unemployment, rising unrest among its ethnic minorities, resurgent student protests, and a looming succession crisis posed by the possibility of the current Supreme Leader’s death. (If the regime had truly consolidated and solidified its rule to the extent that Obama seems to think, then it would not be conducting so many domestic security/anti-riot drills such as the one pictured in this report by Mehr, the organ of the IRI’s nuclear establishment.)

The perils associated with overestimating the IRI’s power are revealed by Khamanei’s very own Nowruz postcard to the Iranian nation. In it, the Supreme Leader reminds Iranians that the “bullying powers” have conceded “that they cannot close the path to nuclear advancement by the Iranian nation.” And in to the President’s message, the venerable Jurisconsult offers more of the same defiance and obfuscation:

“As long as the American government’s actions, orientation, and politics remain the same as they have been for the last 30 years, we will also remain as we have been for 30 years!” [my translation]

Meanwhile, President Obama’s message is bound to reduce the confidence of Iran’s oppressed dissidents and leave them wondering if the US has now completely abandoned their cause.

Note
This piece was published earlier by Harry’s Place and by Z Word Blog, the official blog of the American Jewish Committee (AJC).