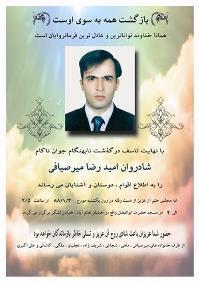 Whether intimidated and forced to leave the country, imprisoned, forced to make fake confessions, tortured, or murdered while imprisoned, Iranian journalists and bloggers continue to be harassed and threatened to keep quiet.  Tehran District Attorney, Saeed Mortazavi’s personal and active role in the recent crackdowns on Iranian bloggers has already delivered more bloggers to Iranian prisons and at least two dead bloggers from Iranian prisons.  The Iranian Parliament is now considering a bill to include the death penalty in cases involving bloggers.  This should make it so much easier for Saeed Mortazavi to further intimidate and apply injustice on Iran’s youngest and brightest whose sole “crime” is to speak their minds.  Watch the following news clip from Aljazeera TV on this topic.

Photo shows the death announcement of Omidreza Mirsayafi, a 28-year old blogger who died at Evin’s Ward 209 last week.  He was serving a 2.5 year sentence for writing a letter to Supreme Leader Ali Khamenei, criticizing him and other Iranian government officials.  From here. Also read the following public statemet by Amnesty International, entitled “Deaths in custody in Iran highlight prison authorities’ disregard for life.”