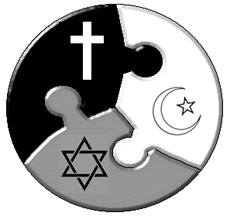 During the post revolutionary period of 1979-82, after fighting and eliminating most of the internal opposition; ayatollah Khomeini and his allied clergies established their Islamist tyranny over the entire Iranian political, military, financial, judicial, and cultural affairs. Since then, a puzzling Persian theocracy has plagued the Middle Eastern politics and become a prime source of emulation and support for most militant Islamists.

To consolidate their tyranny, lucrative industries, banks and major companies were confiscated and controlled by the Islamist instruments (Bonyads). The Iranian military was purged and then subjugated to the constant oversight and scrutiny of the Revolutionary Guards. All school teachers were investigated and purged based on their active obedience of the Shia Islam and adherence to Khomeini’s edicts. Entire universities were closed for up to three years, in order to purge the secular professors and non-believing students. All the radio and television programs were reorganized and scripted to constantly instil revolutionary slogans, repetitive religious citations and tedious sermons into every hour of every day. In short, a dark veil of fundamentalist Islam descended over Iran, much like the overbearing and inhuman dictatorships of the Soviet Russia and the Maoist era China.

With absolute power in their hands, the Khomeini Hezbollah next set their aim at the messianic goal of defeating the enemies of true-Islam, one after the other, from Iraq to Israel and on to America. Arguably, to prepare the world for the return of the Shia messiah, Mahdi the hidden Imam! For the next six years, the whole country became a helpless source of material and human resource for Hezbollah’s incredibly ambitious and fanatically idealistic world-domination experiment! However, even the ‘first step’ of toppling the Baath regime in Iraq proved an insurmountable task.

In 1982, using the human-wave tactic (reminiscent of the Communist methods during the Korean War) Iran’s militia expelled the Iraqi army from all occupied territories. Then, the war changed from defending the Iranian territory to invading the Iraq proper. Relentless killing continued, despite the fact that as early as in 1983, the rich Arab countries of the Persian Gulf had agreed to provide a $70 billion restitution fund to Iran, if Khomeini were to accept the UN truce resolution! When Khomeini refused, similar funds and more were instead made available to the Iraqi regime to pay for modern jets, tanks and chemical weapons, to stop the tsunami wave of Iranian militia. Five years later, Khomeini was forced by an Arab-American coalition to give up on his maniacal ambitions, and drink the ‘poison of peace’ in 1988. Tragically, he only relented after overseeing the mass annihilation of about one million Iranians and Iraqi’s, and $400 billion damage to the economy of both countries!

Meanwhile, the cruel treatment of civil war and political prisoners, and Hezbollah’s inhuman regime of torture and terror, angered many Shia clergies. But upon protesting Khomeini’s regime of death and destruction, even such high ranking Marjah like ayatollah Shariatmadari were condemned and banished. Astonishingly, even ayatollah Montazeri who for a decade was Khomeini’s heir-apparent, was tormented and placed under house-arrest, when he compared Khomeini’s Savak to that of the Shah and much worse.

Khomeini’s angry retorts to all that criticism about tortures and human rights violations was that, ‘the nameless soldiers of the 12th Imam’ were doing god’s work in the prisons; and besides, those jailed criminals were not human to have any rights! Therefore, after the 1988 humiliating defeat in the hands of the Baath regime of Iraq and before succumbing to cancer, Khomeini ordered the mass execution of the remaining thousands of political prisoners across the country. That demonic action killed about 5,000 dissidents in a single week, which was more than the total number who had perished during the 53 years of Pahlavi dynasty!

With ayatollah Montazeri removed from the successor position and all the other senior clergies either against or unsympathetic towards the Islamic Republic’s policies, Khomeini had no Marjah successor. Hence, it became necessary for the governing clerical establishment to not only change Khomeini’s political will and testament, but also change the whole constitution in a hurry! Essentially, the emphasis on the religious requirements for the lead mullah (Velayat Faghieh) was removed from the constitution, so that a lesser clergy (Khamenei) could occupy the top position. However, to seal the deal with the other strong-man of the state, the office of prime minister was dissolved and most executive power was transferred to president Rafsanjani (1989-97).

The Khamenei-Rafsanjani diumvirate ruled over an exceedingly corrupt government, whose key players began to concentrate on looting and pillaging the country’s wealth and resources. On the foreign policy arena, during the 1980’s and 1990’s the Islamist tyranny actively pursed a doctrine of ‘exporting the revolution’ and hunting their overseas dissidents. That export translated into supporting a number of Islamist and terrorist groups in the Middle East; and that hunt resulted in the brutal murder of many prominent Iranians oversees, most notably the last Shah’s liberal premier (Dr. Bakhtiar).

In their execution of Dr. Bakhtiar and others in Europe, Hezbollah not only used their typical brute-force tactics, but also abused their victims in such a horrific way (multiple stabbings and mutilations) to send a message to all the other opposition. Of course, that method was completely in line with Khomeini’s teachings, who as early as in the 1940’s had advocated the ‘cutting of tongues and heads’ of those who would dare talk or write against Islam or Shiaism! The savagery of those attacks completely isolated Iran, despite desperate efforts by some moderate officials.

The people’s reaction to 20 years of murder and mayhem in Iran was a surprise vote during the presidential elections of 1997, when a moderate and liberal-minded candidate was mistakenly allowed to run. Khatami won the election with 70% of the vote, over a radical mullah who was the Majles speaker and the leader’s choice! In response, the concerned Hezbollah unleashed their death-squads in Iran, and started a massive campaign of vicious assassinations, in order to nullify any opposition attempt at utilizing Khatami’s victory. Their efforts resulted in a ‘chain of murders’ which created a power struggle between Khatami’s protesting supporters and the hardliners, who soon solidified around the ‘supreme leader’.

When the moderate vs. hardliner struggle came to a head, following a vicious Hezbollah attack on students’ dormitory in Tehran, Khatami was forced to back-off, and turned into a powerless figure-head for the rest of his presidency. Sadly, Khatami’s capitulation only strengthened Hezbollah’s resolve to regain all aspects of the ‘elected’ political power in Iran, including the Majles and the presidency, by 2005. All was done through shameless purging of the candidate lists, blatant vote rigging and brutal intimidation. The unelected (assigned) half of the government (judiciary, armed forces and supreme councils) as always, are ruled by the lead mullah’s henchmen.

Consequently in early 2009, all levels of government in Iran are completely dominated by the fanatical Hezbollah, who are preparing for their next battle with the ‘infidel’ world. With the added dimension of nuclear capabilities, the Islamist tyranny in Iran now poses the greatest threat to world peace. Puzzling enough, all that doom-and-gloom is despite the fact that an overwhelming majority (70%) of the Iranian population have consistently shown their allegiance to the democratic and peaceful principles, with utter resentment towards fanaticism.

A relevant reference: The Persian Puzzle, by K. Pollack.