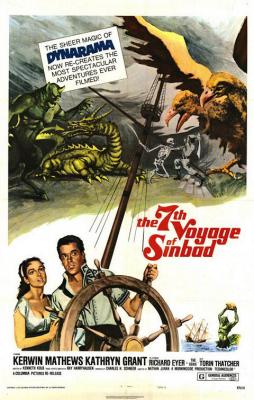 The first Film of a Trilogy on the adventures of Sinbad the Sailor was brought to screen by the famous SFX Wizard director Ray Harryhausen using the Stop Motion technique known as Dynamation. Starring Kerwin Mathews as Sinbad. Enjoy …

“When captain Sinbad and his men land on the island Colossa they are confronted with man-eating cyclops. They can escape with the help of the magician Sokurah and his magic lamp. The lamp which contains a helpful demon unfortunately gets lost. Back in Bagdad the magician performs impressive tricks. He wants to start an expedition back to Colossa to bringing the lamp back in his possession. But the kalif rejects the magicians requests. The malicious Sokurah breaks into the rooms of the princess at night and shrinks the princess to the size of an elf. The magician offers his abilities to heal the princess on next day. But one of the magic potions necessary components must be procured from the island Colossa first. So captain Sindbad sails again to the island Colossa and to the dangers expecting him there…”