The Poets’ Vision of The World As ONE 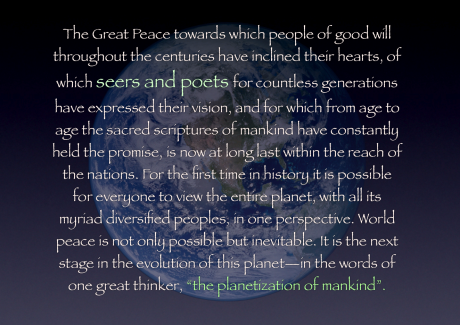 Now Ive been smiling lately, thinking about the good things to come

And I believe it could be, something good has begun

Glide on the peace train

Everyone jump upon the peace train

Get your bags together, go bring your good friends too

Cause its getting nearer, it soon will be with you

Now come and join the living, its not so far from you

And its getting nearer, soon it will all be true

Now Ive been crying lately, thinking about the world as it is

Why must we go on hating, why cant we live in bliss

Cause out on the edge of darkness, there rides a peace train

The Great Peace towards which people of good will throughout the centuries have inclined their hearts, of which seers and poets for countless generations have expressed their vision, and for which from age to age the sacred scriptures of mankind have constantly held the promise, is now at long last within the reach of the nations. For the first time in history it is possible for everyone to view the entire planet, with all its myriad diversified peoples, in one perspective. World peace is not only possible but inevitable. It is the next stage in the evolution of this planet—in the words of one great thinker, “the planetization of mankind”.

It’s easy if you try

No hell below us

Above us only sky

It isn’t hard to do

Nothing to kill or die for

And no religion too

You may say that I’m a dreamer

But I’m not the only one

I hope someday you’ll join us

And the world will be as one

I wonder if you can

No need for greed or hunger

A brotherhood of man

Sharing all the world

You may say that I’m a dreamer

But I’m not the only one

I hope someday you’ll join us

And the world will live as one

Unbridled nationalism, as distinguished from a sane and legitimate patriotism, must give way to a wider loyalty, to the love of humanity as a whole. Bahá’u’lláh’s statement is: “The earth is but one country, and mankind its citizens.” The concept of world citizenship is a direct result of the contraction of the world into a single neighbourhood through scientific advances and of the indisputable interdependence of nations. Love of all the world’s peoples does not exclude love of one’s country. The advantage of the part in a world society is best served by promoting the advantage of the whole. Current international activities in various fields which nurture mutual affection and a sense of solidarity among peoples need greatly to be increased.

Acceptance of the oneness of mankind is the first fundamental prerequisite for reorganization and administration of the world as one country, the home of humankind. Universal acceptance of this spiritual principle is essential to any successful attempt to establish world peace. It should therefore be universally proclaimed, taught in schools, and constantly asserted in every nation as preparation for the organic change in the structure of society which it implies.

In the Bahá’í view, recognition of the oneness of mankind “calls for no less than the reconstruction and the demilitarization of the whole civilized world—a world organically unified in all the essential aspects of its life, its political machinery, its spiritual aspiration, its trade and finance, its script and language, and yet infinite in the diversity of the national characteristics of its federated units.”

Elaborating the implications of this pivotal principle, Shoghi Effendi, the Guardian of the Bahá’í Faith, commented in 1931 that: “Far from aiming at the subversion of the existing foundations of society, it seeks to broaden its basis, to remold its institutions in a manner consonant with the needs of an ever-changing world. It can conflict with no legitimate allegiances, nor can it undermine essential loyalties. Its purpose is neither to stifle the flame of a sane and intelligent patriotism in men’s hearts, nor to abolish the system of national autonomy so essential if the evils of excessive centralization are to be avoided. It does not ignore, nor does it attempt to suppress, the diversity of ethnical origins, of climate, of history, of language and tradition, of thought and habit, that differentiate the peoples and nations of the world. It calls for a wider loyalty, for a larger aspiration than any that has animated the human race. It insists upon the subordination of national impulses and interests to the imperative claims of a unified world. It repudiates excessive centralization on one hand, and disclaims all attempts at uniformity on the other. Its watchword is unity in diversity”. 11

The achievement of such ends requires several stages in the adjustment of national political attitudes, which now verge on anarchy in the absence of clearly defined laws or universally accepted and enforceable principles regulating the relationships between nations. The League of Nations, the United Nations, and the many organizations and agreements produced by them have unquestionably been helpful in attenuating some of the negative effects of international conflicts, but they have shown themselves incapable of preventing war. Indeed, there have been scores of wars since the end of the Second World War; many are yet raging.

Disunity is a danger that the nations and peoples of the earth can no longer endure; the consequences are too terrible to contemplate, too obvious to require any demonstration. “The well-being of mankind,” Bahá’u’lláh wrote more than a century ago, “its peace and security, are unattainable unless and until its unity is firmly established.” In observing that “mankind is groaning, is dying to be led to unity, and to terminate its age-long martyrdom”, Shoghi Effendi further commented that: “Unification of the whole of mankind is the hall-mark of the stage which human society is now approaching. Unity of family, of tribe, of city-state, and nation have been successively attempted and fully established. World unity is the goal towards which a harassed humanity is striving. Nation-building has come to an end.

The anarchy inherent in state sovereignty is moving towards a climax.

A world, growing to maturity, must abandon this fetish, recognize the oneness and wholeness of human relationships, and establish once for all the machinery that can best incarnate this fundamental principle of its life.” 14

From Bahai writings , written in 1936

I leave you with this last one

Give me Love; PEACE ON EARTH.