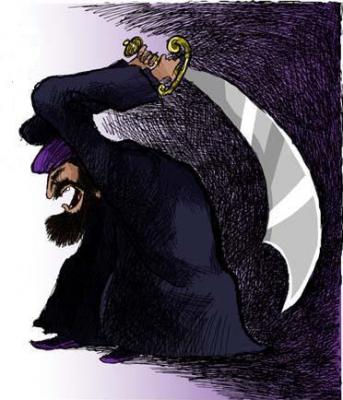 “All that is necessary for the triumph of evil is for good men to do nothing.” (Edmund Burke)

All prominent supporters of Subh-i-Azal who withstood Mirza Husayn Ali [Baha’u’llah]’s claims were marked out for death, and in Baghdad Mulla Rajab Ali “Kahir” and his brother, Hajji Mirza Ahmad, Hajji Mirza Muhammad Reza, and several others fell one by one by the knife or bullet of the assassin…As to the assassination of the three Ezelis, Aka Jan Bey, Hajji Seyyed Muhammad of Isfahan, and Mirza Riza-Kulli of Tafrish, by some of Beha’s followers at Acre, there can, I fear, be but little doubt…the passage in the Kitab-i-Aqdas alluding (apparently) to Hajji Seyyed Muhammad’s death…proves Beha’u’llah regarded this event with some complaisance…On the murder of one Aqa Muhammad Ali of Isfahan in Istanbul by one Mirza Abu’l-Qasim the Bakhtiyari  [Browne quoting the words of Mirza Husayn Ali Nuri Baha’u’llah addressed to the latter, states] “O phlebotomist of the Divine Unity! Throb like the artery in the body of the Contingent World, and drink of the blood of the Block of Heedlessness for that he turned aside from the aspect of thy Lord the Merciful!”

At first not a few prominent Babis, including even several “Letters of the Living” and personal friends of the Bab, adhered faithfully to Subh-e Azal. One by one these disappeared, most of them, as I fear cannot be doubted, by the foul play on the part of too zealous Baha’is. “Companions” (as-hab), Mirza Riza Kulli and Mirza Nasr’ullah of Tafrish, were stabbed or poisoned in Adrianople and Acre. Two of the “Letters of the Living,” Aka Siyyid `Ali the Arab, and Mulla Rajab `Ali Kahir, were assassinated, the one at Tabriz, the other at Kerbela. The brother of the latter, Aka Ali Muhammad, was also murdered in Baghdad….