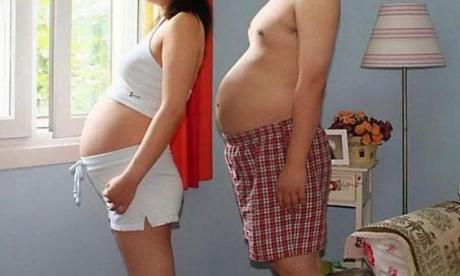 Finally!  In the midst of all these horrible news, especially coming from Iran, I heard on the radio that a man told a 911 dispatcher that , as she was giving birth to a baby boy.  I believe this man to be one of the luckiest men alive for not knowing about his wife’s pregnancy, and his wife, knowingly or unknowingly, to be one of the most compassionate women anywhere in the world for not telling him about it.

What I’m saying might sound strange to some readers, but if you allow me to write a few words you might understand why I’m so envious of this man.  He didn’t go through nine months of hell that his wife would have put him through, he didn’t have to rub coconut oil on his wife’s fat belly, yes she is fat, she is so fat that they didn’t notice she was pregnant, and he didn’t have to keep saying “WE are pregnant”, “WE are pregnant”!  What “WE”?!  Who invented this WE pregnancy stuff?!  I bet it was a woman.  I bet the first woman that came up with this “WE are pregnant” stuff was a woman that couldn’t keep her pregnancy to herself, so she had to get her husband pregnant too.  What I want to know is this, if both of them are pregnant, why don’t they have two babies at a time, one out of her vagina and one out of his…, well I can’t say it, but go ahead and imagine it for yourself.

But, let’s not dwell too much in that WE stuff; let’s just talk about this guy who was so lucky for nine months.  I can imagine the days that men were men and any time one of them got his wife pregnant it wouldn’t phase him one way or another, and when she went out in the woods to deliver, the man would say, so what?!  shaakh’e ghool shekondeh?  Yes, those men were tough alright!  But look at us now, look what has happened to us:

– You must go to Lamaze classes, sir!
– What for?!
– So, you can learn about PHILOSOPHY of pregnancy.
– Are you kidding me?!  I didn’t know pregnancy had philosophy.  I always thought once I learned Socrates, Plato, and Aristotle’s philosophy I was done with philosophy.
– Oooo no sir!  We’ll teach you how natural pregnancy is.
– I know all about it, as it is evident that she is naturally pregnant with the help of my naturally thingy.
– We’ll teach you how to empower your woman to gain confidence in her body.
– Excuse me!  It’s her body; it’s her choice how to feel about it.
– We’ll teach you how to coach her through delivery.
– Why?  Are you short staffed?
– No sir, she needs your support.
– What kind of support?
– There will be a lot of pain.
– I’m sorry; I have no tolerance for pain.
– No sir, she’ll be in a lot of pain.
– Is she going to blame me for it?
– No sir, this is a joyous moment for couples who are pregnant.
– Excuse me!  I’m not pregnant, she is.

Well, you see?!  They got us pregnant now, where as before we would go into the woods and hunt bears and cut them up into pieces and bring them to the village and feed a piece of a liver to the baby, and that was the end of that, but now, nine months of nagging, nine months of shear terror till the climactic moment, which is blood and pregnancy juices oozing out all over the place, and the head of the baby coming out that WE have to video tape and post on youetube, for all other helpless men to see.

So, this man was lucky for nine months and he didn’t even know that he was the luckiest man alive, till his wife had to ruin it for him.  Yes, she went to the bathroom and bled all over those nice tiles that he had cleaned earlier that day, and she had to moan and raise her voice, which caused him stress, that’s how I know, by listenjng on the radio to his conversation with the 911 operator, I know that woman had done him wrong at the end by her whining and moaning.

Poor guy!  He even had to clean up the afterbirth, the placenta, and the fetal membrane that was expelled from her uterus after the birth of the baby boy.