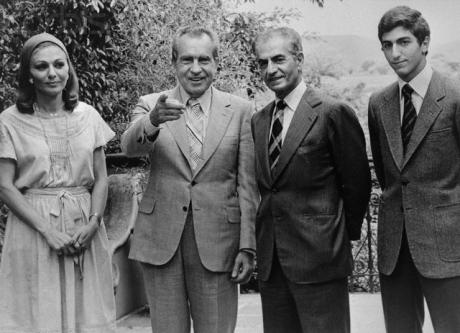 Dear Mr. President: We take this moment to wish you great success in your forthcoming journey to the Soviet Union, recognizing that, while there are many perils, the chance for an enduring peace must be seized and built upon. The relaxation of world tensions has clearly been the great goal of your presidency, and you have done much to build towards this goal by seeking an atmosphere of realism and understanding among all the world’s great powers. . .

We do not wish to dilute our strong and sincere admiration for your initiative for peace. There is, however, a story related to the Russian visit which profoundly disturbs us, and that is the possibility of your stopping over in Iran on the return flight. In other times, we would welcome such an honor. Every citizen of Iran admires and respects you as the President of a great nation. We recognize beyond doubt the tribute you wish in turn to pay to the Iranian people. Unfortunately, your gesture, however well motivated by feelings toward the people of Iran, will inevitably be seen, within. Iran and throughout the world, as one of support for the most corrupt and barbaric rule of this century.

Present day Iran, for all the propaganda aimed by the Shah Pahlavi at the opinion makers of the world, is a police state. It recognizes not one of the most fundamental of the rights of man, not freedom of speech, not freedom of assembly, not the most elementary ideals of fair and public trials. What is more — and this should be especially galling to you, Mr. President, who have worked so hard and effectively to combat the international flow of illicit drugs — the Iranian government and the royal family itself, despite new and tough-looking drug laws and incredibly harsh sentences handed down under them, is deeply enmeshed in the production and distribution of raw opium, as well as manufacture and distribution of the heroin derivative.

The instances of drug smuggling by the Shah’s twin, Princess Ashraf, by the Shah’s brother, by Prince Dawallou, by member after member of the Shah’s blood family and political family, grow practically daily to proportions that would seem slapstick comedy were the implications for the youth of the world not so deadly and tragic. In Paris, in Switzerland, throughout the world, the attempted arrests, the attempted disclosures of this hideous network of death are thwarted by the same sad phrase — diplomatic immunity. In the most recent incident in this pathetic pattern, the Shah himself was forced secretly to escape Switzerland, taking with him key members of his staff in order to avoid disclosure of the entire network of illegal traffic.

Mr. President, your concern for the freedom of the American people from the terrible scourge of habitual drugs is honorable and commendable. You have used and continue to use the power and prestige of the United States and of the Presidency to control the disease of drug abuse all. over the world. What you have done in conjunction with the government of Turkey is particularly adroit and admirable. But, we do not understand how you, as the representative of the American people and of the American government, can be a guest of the Shah and his family in Iran even for one day, knowing the corruption they practice daily, knowing the traffic in drugs smuggled week by week under cover of diplomatic immunity, knowing the American lives they jeopardize, and the lives all over the world.

The people of Iran will not understand. The world will not understand that a man as President of the United States, under the flag of freedom, freedom of speech, press, assembly, religion, and under the flag of other freedoms, freedom from fear, freedom from the nightmare of narcotics, can bestow by his official visit the mantle of respectability upon a monarchy which is so much the opposite of your ideals. We sincerely believe and hope that you will decide for the Iranian people, that you will not become the official guest of the present regime.