You must smoke cigarettes! 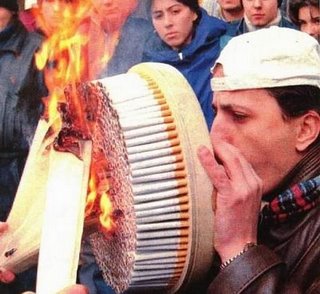 A stimulus package that one can die for, increase your cigarette consumption.  A local Chinese government has ordered its citizens to smoke more cigarettes in the hopes of increasing its tax revenues.  Apparently cigarette consumption in the Province of Hubei in the Central China has been declining in the last few years, causing hardship upon the local communist-capitalist provincial government.  Yes, the Chinese masses have once again failed their government by their treacherous act of trying to live a healthier life style.  But fortunately there is a government in China, or a part of it, who truly cares about what’s best for the masses, by trying to kill them off from diseases related to smoking cigarettes.

Quotas have been set for cigarette consumption for all public employees in that province, including those who work for public schools, who were so shamelessly trying to teach innocent Chinese children about the dangers of smoking, come to find out that those teachers and principle were the true traitors to the glorious Chinese Revolution.  So now they have to smoke cigarettes, and if that kills them, so what?!  It’s for the collective good on the people.  The government has even established a task force; call it China’s Cigarette Gestapo, if you wish.  Their job is to ensure the quota is met.  They even go through people’s ashtrays and count cigarette butts, and what brand of cigarettes have been smoked.  That is correct, not only the regulation specified how much cigarettes has to be smoked, but also what brand, since the government does not want brands manufactured outside of the province be consumed.  Apparently they don’t want others to benefit from this stimulus package.

But let’s see, is this government the only one in the world that tries to stimulate its economy by promoting a bad habit, one that’s a potential killer, or are there other similar actions by other governments that try to kill its citizens, and make money off of them at the same time?  I’ve been thinking about this question for a couple of days now, and here is what I’ve come up with so far:

Prostitution is legal and heavily regulated in half of the counties in Nevada State.  There are nearly thirty active licensed brothels in Nevada.  Brothels and prostitutes are subject to federal income tax and local fees, but there in no state income tax in Nevada.  Prostitutes are required to fill out an IRS (not to be confused with IRI) 1099-MISC form, brothel license fee is as high as $100,000 annually, prostitutes can be as young as 18 in some counties, and there are regulations in place about what officially constitutes exchange of sex for money.

Also, State of Nevada recently drastically increased its taxation of cigarettes, and the revenues are supposed to be used for construction of new schools.  And of course, the biggest government source of income is from gambling.  The monthly fee from a simple slot machine is as much as $2,500 (not to be confused with 2,500 years of glorious Persian civilization).  So, what we have here is a government that heavily relies on legal vices for its own survival, but first of all does Nevada government actively, and forcibly, promote those vices?  And then, does those vices are potentially dangerous to people’s health to a degree that it would eventually kill them?

By the way, at the Music Festival I noticed a lot of good people were cigarette smokers, so thank you so much for trying to stimulate the economy.

Update: as I was getting ready to post this blog I read a news item that the Chinese provincial government has backed down from their demand without much elaboration.