You and the Bear 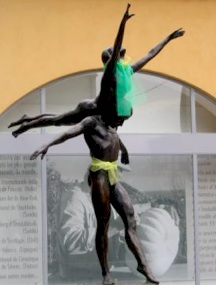 Sitting in a room, feeling cavalier
There came to life an ornament
From the ceiling like a chandelier
A bear, reaching for me from the rear

Struggling to escape the brown bear
Calmly I begged him with eyes in despair
To spare me his strength and unintentional harm
He reached for me with all his might and charm
Spectators were terrified, screaming
The bear’s lower body stuck in the ceiling
Seemingly rescued me, I was relieved
Didn’t know from what, but beaming

Dream’s miracle meddled at once
I found myself in another place
In a white room sitting with my friends
Longing for your friendship and astuteness
Yearning for you, happily sitting tight

You offered your usual analysis and advice
Then suddenly there was just you and I
You placed me on your lap, oh my…
My legs wrapped around you tied
My sanctuary were your caring eyes
We hugged gently
Our heads resting on each other’s shoulders
Our arms wrapped around jointly,
We became one, caressing softly
The song of our hearts
Was smooth and calm
Lifted us up, to cloud nine
Could it be that you were mine?

My eyes opened to a ray of sun
Then all of a sudden you and the bear were gone,
I realized it was all just a dream,
I went for a cup of coffee and some cream