This great moment of change 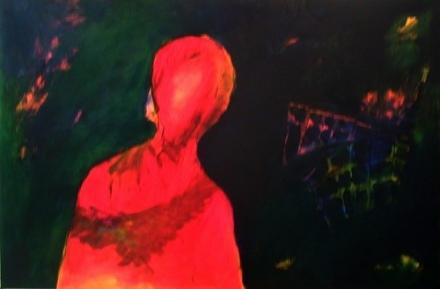 Swaying from this moment to another, I’m going from age to age, looking back with resentment or thrill, to define this singular instant that carries its weight on me, and I’m disfigured, haunted, stabbed, distorted, disappointed or content – over and over — by time, by faces, by who I was. By who I didn’t want to be.

Running in between dying trees of my grandmother’s backyard, I’m surrounded by the shadows of the tallest walls of the world. I leap over dead roots of oaks and I touch the sadness of Grandma’s weeping tree. I pass by that broken seesaw that nobody else has ever shared with me, and the sky gets lost and the trail that could take me back to the house. It’s raining and I’m scared. Scared from cockroaches and lizards that change their color from blue to green, and scared from the fall of hanging spiders, and the deevs of the yard. I cry by my own imagining of pain, and imagining grandma’s long needle, hidden in her pocket, reserved for those who dare defy the rules of her kingdom.

I’m watching a movie with my father. Just the two of us. He’s laughing out loud, rooting for my hero.

The woman in fur coat smiles at my mother, glancing at me. “You should do something for your daughter. She’s getting too fat,” she says, staring at me with disdain. But Mother caresses my hair, so gently, and the woman disappears forever.

Father’s chasing me. His punishment waiting. Mother’s moaning on the floor, and I don’t stop. Still, in this hopeless escape, I wonder whether a pair of scissors could ever cut my wrists.

The boy I love takes a hard drag on his cigarette and the smoke hides the color of his gaze. We don’t talk to each other. Acting like strangers. But I know whatever comes out of his sweet lips is going to burn me.

Stuffed in a closet. Under a silence. Not crawling. Not moving. Waiting. Waiting for a siren, or a blast. Alone. Alone with my monsters hiding behind me. Mother’s knocking on the door. “Don’t you need anything Azizam?” she asks.

Mother’s old. Father older. The house, raided by the morality police. Father is talking to the Islamic Pasdar. Mother on my side. “Let her leave,” Father says, and it’s the first time I see him begging a bastard. Mother’s squeezing my skin. I squeeze hers.

“She could leave,” the Pasdar says, “But only her,” and he pulls me away from Mother’s grip. But I know that she had never give up on me.

Father rushes toward me, and the three of us forget the past and embrace each other for the first time, …and the last time too.

I choke up, leaving, and they are choking behind me. I listen to Father’s shame. I listen to Mother’s sorrow, and I hear them wailing the way they’ve never wailed before. As if I’ve already died.

And I weep. As if Iran has already left me. I sigh, and the only home I knew disappears in this sigh.

1994. It’s the year of joy and grief. The year Theo is born. The year Father is going to die. They’re not going to meet. Father, too sick. Theo, too young. I, too busy.

And this moment, this now, becomes this unique instant, unlike any other moments of my life, where I am this person, this crowd, sucked in this hole, which is now, …and then, it isn’t anymore.

This unique moment of big change.