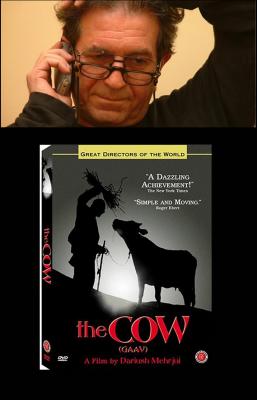 Dariush Mehrjui speaks about his classic and most controversial movie “GAV” aka “THE COW”, which was made during the Pahlavi era and was faced with some censorship at the time but which finally was released due to its International critical success in Film Festivals worldwide. It should be noted that Mehrjui’s perfect English is also due to the fact that he studied Film at UCLA’s film department back in the 1960’s.

Dariush Mehrjui made his debut in 1966 with Diamond 33. His second featured film, Gaav, brought him national and international recognition. Gaav, a compelling symbolic drama, is about a simple villager and his nearly mythical attachment to his cow. The story of the film was from renowned Iranian literary figure Gholamhossein Sa’edi. The film’s score was composed by musician Hormoz Farhat. In 1971, the film was smuggled out of Iran and submitted to the Venice Film Festival where, without programming or subtitles, it became the largest event of that year’s festival.[4] The film was a turning point in the history of Iranian cinema. The public received it with great enthusiasm, despite the fact that it had ignored all the traditional elements of box office attraction. Several of Iran’s prominent actors (Ezatolah Entezami, Ali Nassirian, Jamshid Mashayekhi, and Jafar Vali) played roles in the film.

The DVD is Available at Amazon.com