To Vote or Not To Vote, That is the question! 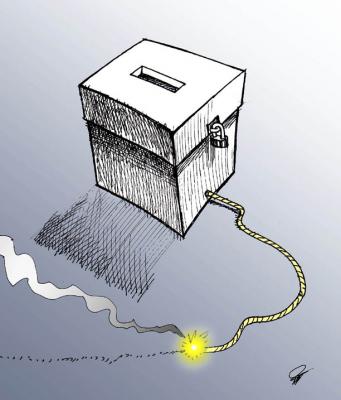 This article is not intended to present any political doctrine, for it is a summary of the blogs that has been written in past few months on none other than subject of Presidential Election 2009, Iran.

One of the earlier articles that surfaced was from group that relentlessly advocating the boycott[abstention] of the election. Their reasoning: Participating in Presidential election is [Legitimizing] the Islamic Republic [ to be referred as Regime]. This group who reside mostly in diaspora, had boycotted 2005 Presidential Election citing the same reasoning, which is legitimizing the Regime. History has spoken on 2005 election, which resulted in Mr. Ahmadinejad, an Islamic hardliner to be elected to the office. The rest is history as we have witnessed.

Generally speaking, an abstention may be used to indicate the voting individual’s ambivalence about the measure, or mild disapproval that does not rise to the level of active opposition. Abstention can also be used when someone has a certain position about an issue, but since the popular sentiment supports the opposite, it might be politically incorrect to vote according to his or her conscience. A person may also abstain when they do not feel adequately informed about the issue at hand, or has not participated in relevant discussion.

Ahmadinejad’s administration has proved to be disastrous for Iran, internationally, economically and domestically. Iran is getting ready for another election come June 12, 2009. Boycotting the election, particularly from a group who has proven to be astonishingly detached from Iranian popular, and so gravely irrelevant in the political arena is not the answer to our dilemma. Then what is the answer?

As the candidates rose to ballets, other blogs started to appear. Call for reform in Iran seemed to have the strongest voice. Candidate? Mousavi’s and Karubi’s with massive blood on their hand from mass murders of 80’s and 90’s. However this group seemingly have a workable alternative, and that is they claim democracy is an evolution of society. In which society gradually by means of limited freedom and democracy that there is go forward toward true and sustainable democracy. They cite historical event such as the French revolution in which it took The Committee of Public Safety  under the control of Maximilien Robespierre, a lawyer, and the Jacobins who unleashed the Reign of Terror (1793-1794). According to archival records, at least 16,594 people died under the guillotine or otherwise after accusations of counter-revolutionary activities. They argue that the true democracy was not realized for 20 years, and the progress was gradual shift from Reign of Terror to today’s French.

The third group who have been very vocal this this election period are small band of Traitors who call for armed attack against Iran by a foreign force namely USA or Israel. They cite success story of Iraq[lack of better word] as the reasoning behind their motivation. They argue that a foreign nation [namely USA and Israel] have the most genuine interest of Iranian public they truly want to see a free and prospers Iran. They claim that once these forces LIBERATE Iran from the clutches of IR, they Iran is going to be as democratic and as prosperous as Iraq. Treachery of this group and their personal agenda behind this call deserves nothing short of court marshal for high treason.

The forth there are monarchist group. They truly believe that monarchy is the answer to the ills of the Iranian society this this juncture. They cite success stories of monarchy in UK and few other countries and justification of their wants. Iran has already had the experience with Shah and his dynasty. Asides form this Monarchy by nature is an outdated form of government in addition for it being a dictatorship in nature.

And Finally there are supporters of Secularism. This group genuinely support a true democracy in Iran where there is true and clear separation of religion and government. Where freedom flourishes, minorities are treated equally by rule of law. Where 50% of our population being women are give equal rights without any restriction from outdated Sharia Law. Where these group fall short is means by which this goal needs to be attained.